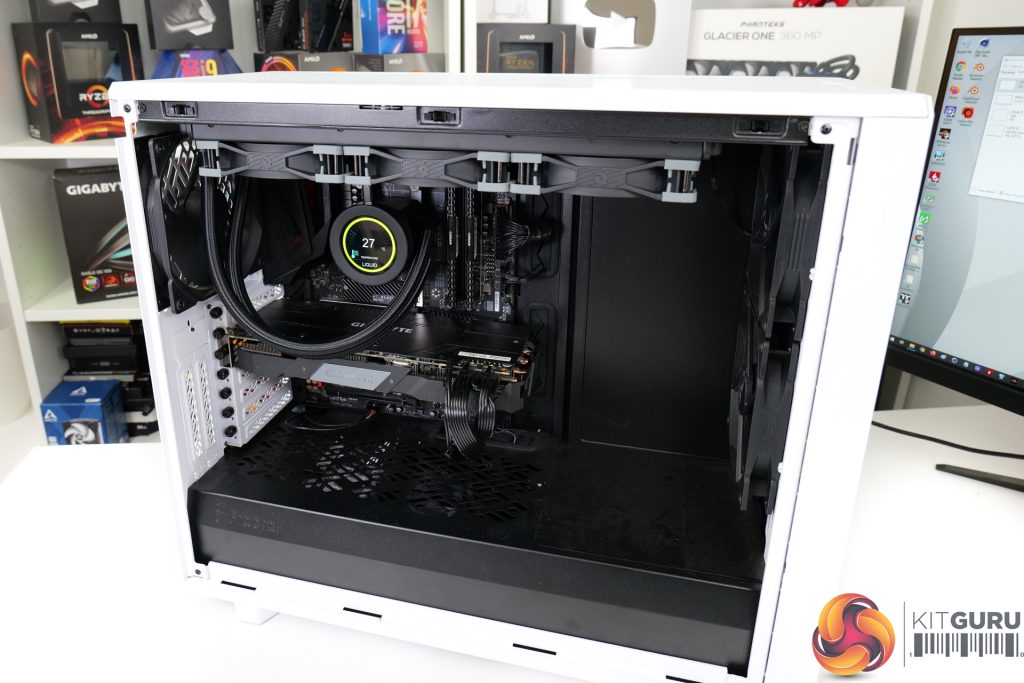 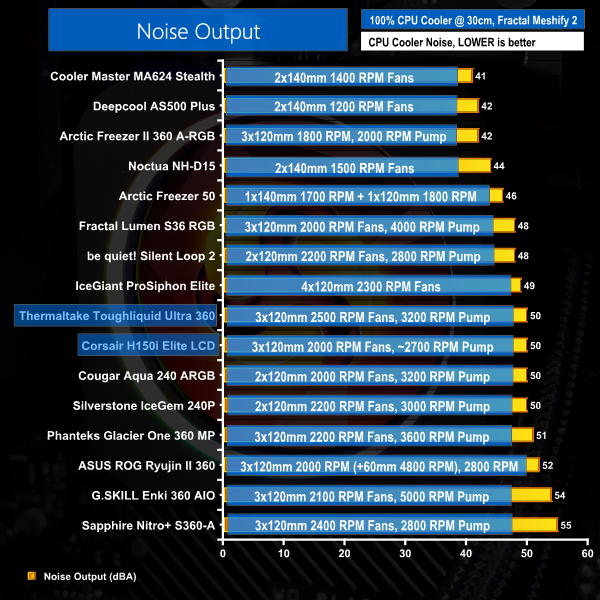 Let’s start off with noise performance at 100% fan speed. This is important for getting an indication of where our performance expectations should lie based on noise output.

Noise performance on both units falls roughly where we would expect for a triple-fan AIO liquid cooler. 50dBA recorded level is certainly loud and noticeable, but it is not painfully so. And of course, both units feature good PWM speed control ranges for the fans in order to tune a custom curve.

Thermaltake actually looks to be doing a solid job here given the very high 2500 RPM speed rating of its fans. But we will have to see how that plays out in terms of performance levels. 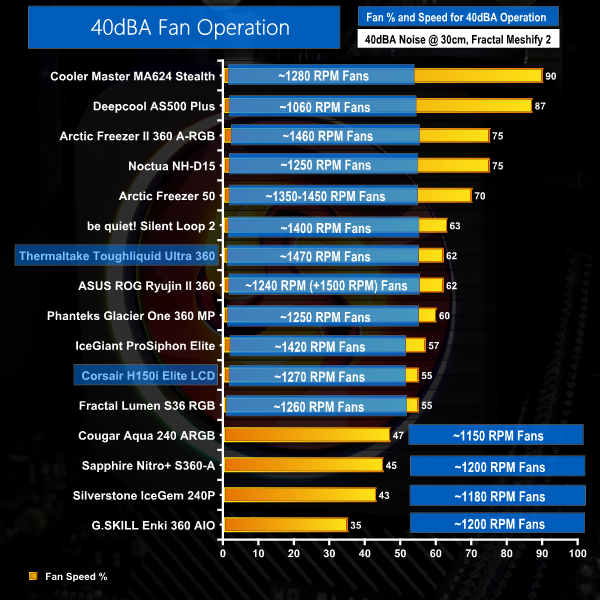 We adjust each cooler’s fan speeds until our 40dBA noise output target is reached.

For the Corsair H150i Elite LCD, this resulted in a fan duty cycle of 55%, which translated into 1270 RPM operating speed according to iCUE. The pump was maintained at its high-speed level under the iCUE ‘Extreme’ speed profile.

Thermaltake’s Toughliquid Ultra 360 faired well in this test, with its fans managing to run at 62% duty cycle for 40dBA noise output. This translated into around 1470 RPM operating speed according to the UEFI and monitoring software. We also maintained pump speed at 100% or 3200 RPM for Thermaltake. 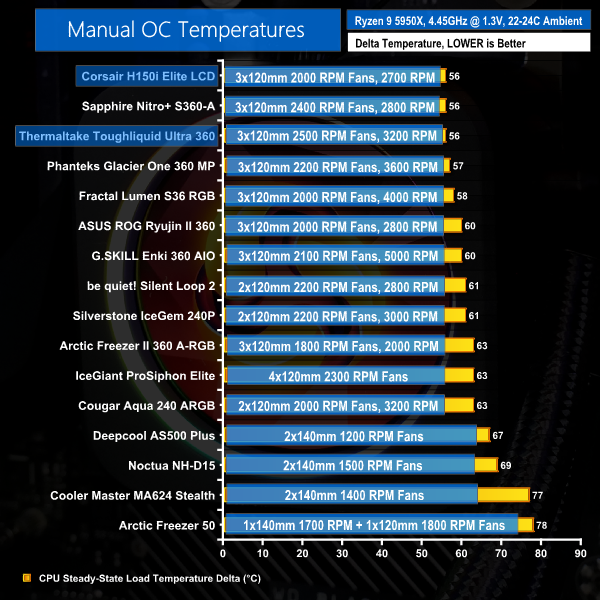 Loud at high fan speed, yes, but high performance too.

Both the Corsair and Thermaltake 360 AIOs manage to match the Asetek-based Sapphire cooler that we recently reviewed for top spot in our chart. Handling around 220W of Ryzen 9 5950X package power for a sub-60C delta reading is impressive.

Thus far, there really is very little to distinguish between the pair of 360mm screen-equipped AIOs, so let’s take a look at some noise-normalised testing. 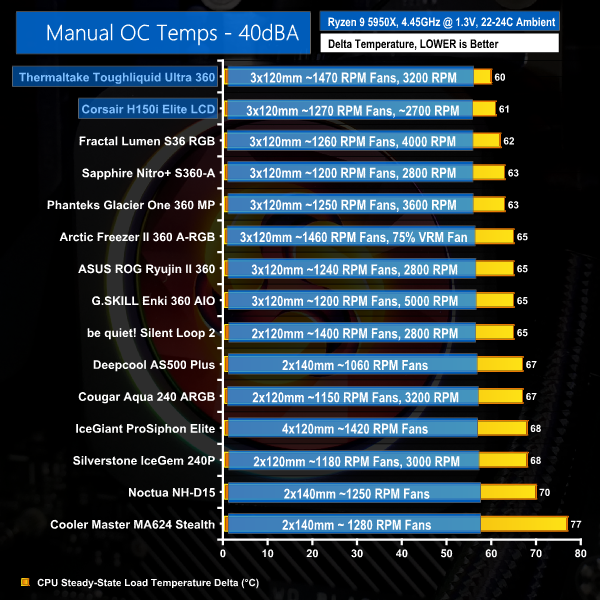 Thanks to the Thermaltake unit’s ability to maintain slightly more of its fans’ duty cycle, we see a top-of-the-chart result from the Toughliquid Ultra 360. Here, the Corsair unit is marginally behind in terms of cooling potential, though it still manages to beat out the other 360 AIOs in our test hierarchy.

Thermaltake’s result here is impressive and it gives an indication as to the quality of the Toughfan 12 Turbo fans used on the unit. 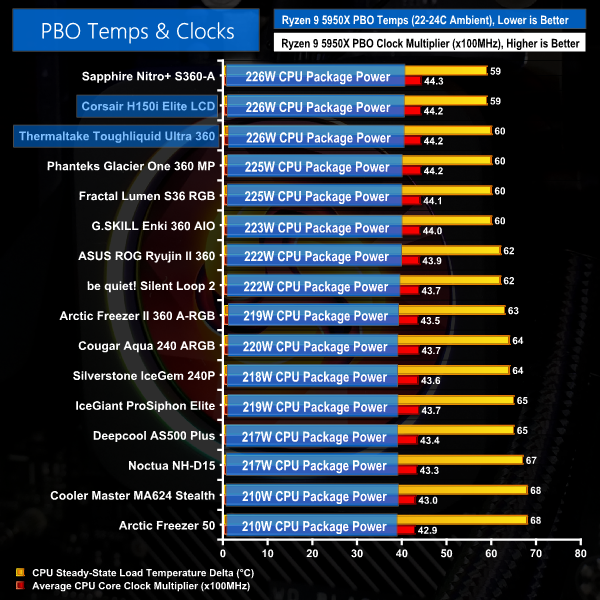 Now that we are back at full fan speed testing, we see the chart positions between Corsair and Thermaltake flip back to the H150i Elite LCD in the lead… ever so slightly.

In reality, there is little to distinguish between the two 360mm screen-equipped coolers here. Both units manage 226W of Ryzen 9 CPU cooler. And both see the chip running at a little over 4.4GHz average.

Of course, the elephant in the room here is that the significantly cheaper 360mm AIOs also offer roughly the same performance as Corsair’s and Thermaltake’s premium and costly units. But this is a known entity given the significant cost associated with the 2.1” pump-mounted screen. 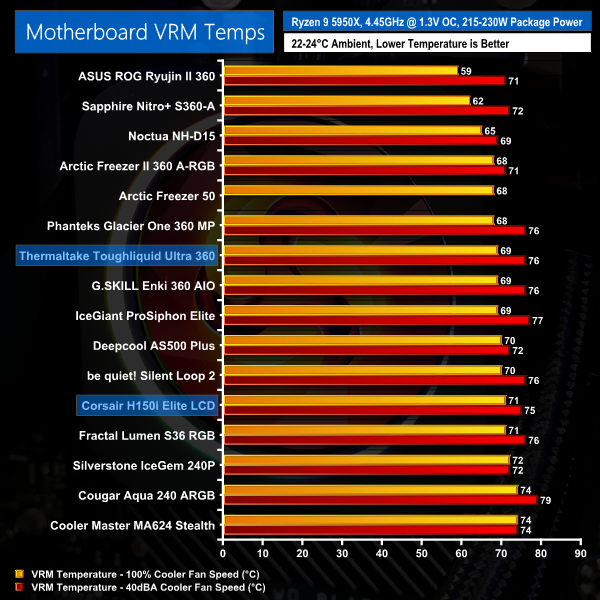 And rounding out with VRM temperature data, Thermaltake does better here and that is primarily due to its higher speed fans in the vicinity of our motherboard’s VRM heatsink. Corsair’s incidental VRM cooling results are uninspiring at full speed, but are comparably mediocre for the 40dBA comparison.

Neither of these 360mm units can come anywhere near the 60mm VRM fan-equipped ASUS ROG Ryujin II 360 in terms of VRM cooling capability. And that 360mm AIO from ASUS is actually a valid competitor given its similar price point and inclusion of a 3.5” OLED screen.