Last week at CES 2022, AMD officially introduced its latest GPU, the RX 6500 XT. Announced with a $199 MSRP, the RX 6500 XT has been positioned as an ‘affordable’ RDNA 2-based graphics card. Confirming what we all knew, however, ASUS has announced its own set of MSRPs for the 6500 XT, and they are significantly higher than the figure set by AMD.

If you have even a passing interest in PC hardware, you will know that overpriced GPUs are nothing new. In fact, back in November we reported that current generation graphics cards from both AMD and Nvidia are selling for twice as much as they should be, and – unfortunately – it does appear that AMD’s new RX 6500 XT is going to be another very expensive GPU. 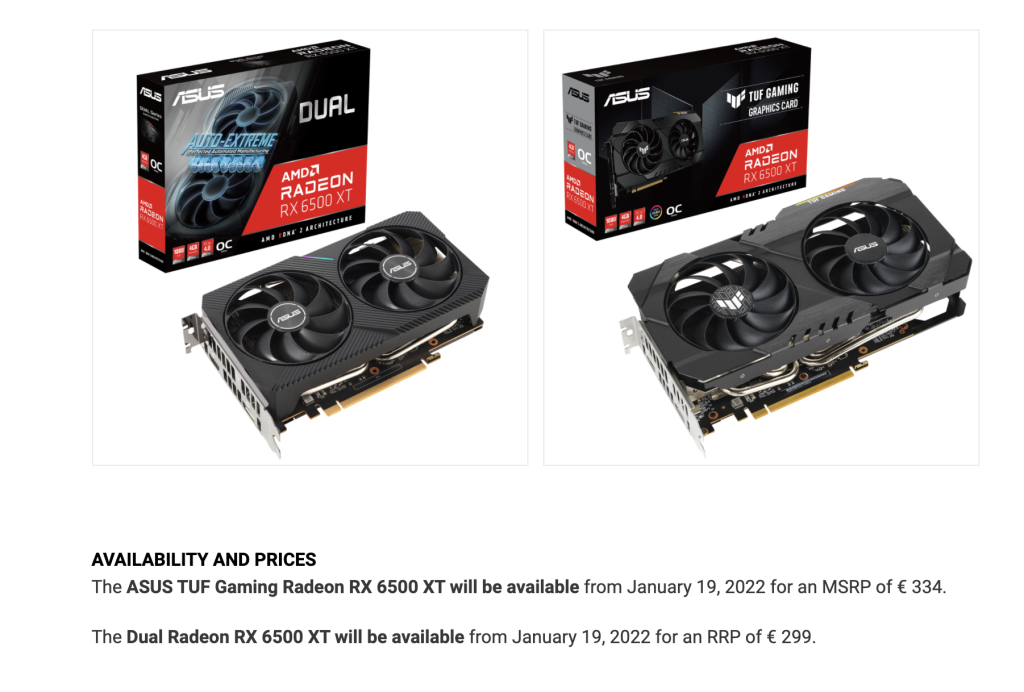 That’s because we now have official pricing details from ASUS Germany (thanks to Andreas Shilling via VideoCardz), who have set an RRP of €299 for their RX 6500 XT Dual model, with the TUF Gaming card coming in €35 more expensive. At the time of writing, €299 works out at about $330, or a 66% increase over AMD’s $199 MSRP. UK pricing is currently unknown, but I’d be surprised to see anything less than £300.

Considering the specs on offer from the RX 6500 XT, and the fact AMD only showed its performance relative to the RX 570 and GTX 1650, such pricing seems absurd – but our final judgement will have to wait until we can test the card for ourselves. The one positive about this GPU is that the 4GB VRAM allocation is likely to dissuade miners from buying stock, hopefully freeing up cards for gamers.

KitGuru says: We won’t be able to know for sure until we can test the RX 6500 XT for ourselves, but on paper it looks like a very weak card – especially if it hits the market at €299 and above.