At Computex this year, Noctua took the opportunity to show off some new prototype coolers currently in the works. Nothing here is quite ready for market yet, but it gives us a good look at what is coming up, and the key differences between current models and newer ones. Oh, and Noctua is finally releasing an all black CPU cooler for those who’ve steered away due to the endless cycle of silver and beige.

The first cooler we saw is currently known as ‘prototype C’ and is based on the current NH-C14S cooler. With this new version Noctua is focussing on providing better motherboard clearance, and more room for taller RAM. The second cooler is known as ‘prototype U’ and is based on the NH-U14S. For this one, Noctua has decided to beef up the cooling functionality, adding a seventh heatpipe to the design and providing 30 percent more surface area.

There is a ‘prototype D’ cooler, which is based on the very popular NH-D15, which takes the same approach as prototype U, adding an extra heatpipe to improve cooling. The contact area between heatpipes and fins has also improved. Finally, the Chromax CPU coolers now come in two all-black options for those who prefer a more stealthy look.

KitGuru Says: Noctua didn’t have much for consumers to immediately get their hands on this year. However, we do see that the company is continuously making improvements to its designs, and is even taking feedback on board with the introduction of the all-black Chromax coolers.

Previous Computex 2018: In Win gets artsy with curved aluminium, lots of tempered glass and a fully lit front panel
Next 9 of the most wanted sequels unlikely to appear this E3 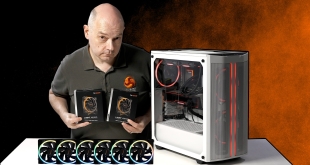 be quiet! has joined the party with new ARGB fans - so Leo builds a PC