Corsair's all-in-one liquid coolers continue to be some of the most popular around. Today, the best-selling Hydro series is getting an upgrade, with Corsair announcing the Hydro H100i RGB Platinum and the H115i RGB Platinum, improving in both form and function.

Both the Platinum H100i and Platinum H115i come paired with Corsair's ML Pro series of RGB magnetic levitation PWM fans, which offer high static pressure and low friction thanks to the magnetic bearings. The H100i comes with two 120mm fans and a 240mm radiator while the new H115i comes with 140mm and a slightly thicker 280mm radiator. 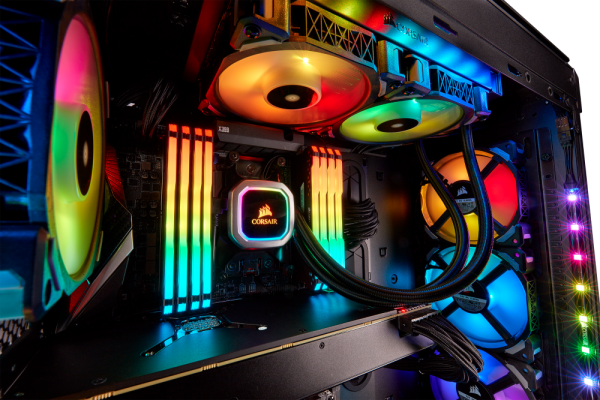 Beyond that, both coolers come with a new copper cold plate, a low-noise pump design and zero-RPM fan profiles which are controllable by software. According to Corsair, users will get precise PWM control over the fans, so you can set the curve however you like.

Fans aren't the only thing getting an upgrade though. These are RGB coolers but the lighting has been upgraded, featuring 16 individually addressable LEDs for greater customisation and colour control. There are four additional ‘addressable RGB' LEDs found in each fan. Using Corsair iCUE, users will be able to change lighting however they see fit, including profiles based on CPU temperature, or different patterns and effects. As you would expect, lighting profiles can by synced across all iCUE compatible devices, including RAM, mice and keyboards.

KitGuru Says: I've switched to a custom water loop in my system, so it has been a while since I've used an AIO cooler. Are any of you currently thinking about upgrading your CPU cooler? Are you tempted by the new Platinum range from Corsair?