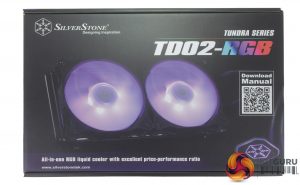 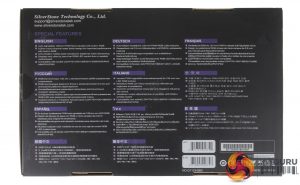 Taking a look at the box front, it shows a pretty large picture of the cooler itself, along with a QR code, which is included for easy access to online installation instructions. The rear of the box includes a small breakdown for some of the key features of the TD02-RGB. It is worth noting that no instructions are included in the box, so you will have to head over to SilverStone’s website, or scan the QR code.

Opening up the box we find a number of pieces of mounting hardware for current AMD and Intel mounts, two 4-pin PWM 120mm fans both with RGB lighting, and then the cooler itself. In terms of accessories, outside of the mounting hardware, you do receive a couple of 4-pin Molex adapters – one to power the LEDs if you are not using a motherboard header, and a second for powering the fans. 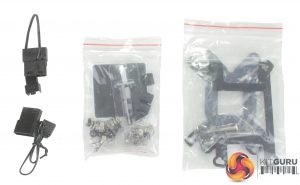 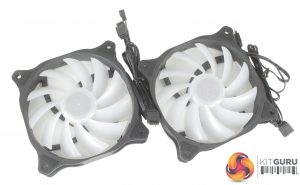 The included fans feel nice and solid, and feature anti-vibration grommets in each corner. Both fans also have two cables running from them, one for the RGB LEDs, and the second a 4-pin PWM connector. It is nice to see that the 4-pin RGB connections are not proprietary which is the case with some coolers, while both fans and the CPU block have two connectors a piece, which allows you to daisy chain them all together. 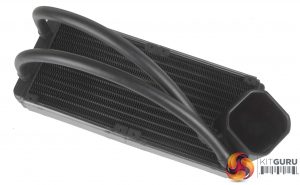 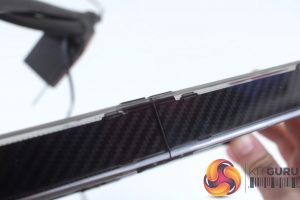 The cooler features a pretty standard 240mm radiator but interestingly with plastic covers clipped over both sides. These covers have a carbon fibre type pattern to them, and further pads to help with reducing fan vibration.

The tubing isn’t braided externally but does feel quite chunky with a 12mm diameter. The tubing is also 310mm long which should be fine regardless of where you install the cooler, be it the front or top of your case.