Today we are taking a look at the Titan Fenrir Siberia Edition CPU cooler which has both horizontal and vertical heatsinks. As such there is clearly plenty of potential for extracting heat from the CPU, just like having two radiators in one room of your house it will greatly improve the heating effect.

There are many CPU coolers on the market, and it is very hard to distinguish between them today. The vast majority have a single large heatsink connected to a copper block by a varying number and thickness of heatpipes and they also then have one or two fans depending on how expensive the model is. There are however a few manufacturers that have ventured into the dual heatsink arena.

Titan have a plethora of CPU coolers available on the market, many of which are based around a dual configuration … the vertical heatsink or the horizontal heatsink.  However, when you start adding fans to this set-up, things get a bit more complicated.

You still need to have decent airflow going through both radiators, with as little turbulence as possible, and preferably forcing the heat towards a case exhaust fan. 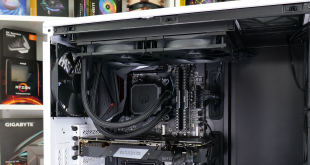