There is no doubting that the CM Storm Strike Force SF-19 Laptop Cooler is a mega performer. The airflow intensity is crazy at the highest settings, ensuring that even the hottest running machines will be getting supported across the full width of the chassis design.

As a design showcase, the SF-19 certainly stands out in a crowded marketplace. Angular edges and rubberised grips pollute the circumference, offering a radical appearance and delivering high levels of system stability. It certainly felt as if it was designed to work with the Alienware M17x R3, which we have currently sitting in our labs.

While the review has been extremely positive so far, there are a few points I would like to address before coming to a close. There are several ways that Cooler Master could actually improve the product further. My main gripe is the fairly high level of noise from the fans. Performance could be kept at the same level, but noise reduced, if they incorporated a large 200-220mm fan. This could spin much slower, but generate similar levels of airflow to the 2 x 140mm fans installed. I also noticed that there is a small amount of air turbulence, due to the fans pushing air against each other on the adjoining axis, this further raises noise levels, particularly when set to high speeds.

The inclusion of a power adapter is unavoidable, these fans will not get enough power from a USB port, however this may be seen as a negative for some people interested in a purchase. Obviously 2 x 140mm fans would suck a laptop battery dry very quickly, but in a mobile environment, the SF-19 can really only be used as a support platform, rather than a dedicated cooler. For a desktop replacement machine this won’t be a problem however as they are only really meant to be moved around a home environment.

Pricing for the product is set at $80 in the US, with no stores in the UK currently with stock. A simple conversion to pounds sterling indicates a £55 price point, although with high levels of VAT, this will assuredly be higher. This is a lot of money for a laptop cooler and certainly at the higher end of the spectrum. That said, if you own a £2,000+ laptop, it would make for a very worthy investment. When all is considered, its a fantastic product, but there are limitations right now which mean it will only target a niche, strictly performance related audience.

KitGuru says: A very high performing cooling, but it is not portable, requires a lot of power via the adaptor and can generate fairly high levels of noise.

Update: Just before going live, we have been informed by Cooler Master that the UK price will be in the region of £85 when it is released next month. If we get any more updates on UK pricing we will update this page. 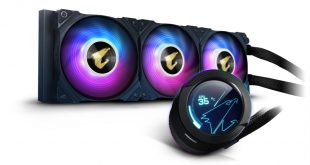