Fitting the cooler was actually relatively easy and while the sheer mass might seem immediately concerning I found the whole procedure painfree and actually quite quick.

The AMD installation uses the reference AMD backplate so the cooler can be fitted without removing the motherboard from a chassis. For this page therefore we are concentrating on an Intel installation procedure.

The first thing to report is that Noctua have created an adjustable backplate for all the current Intel sockets (A,B,C for slots 1366, 1156 etc) and four bolts are simply passed through this via the motherboard and then secured from the front.

The only thing you need to watch (and they mention it in the instructions) is to ensure that the four screws don’t overhang the plate edges, if this happens you won’t get enough of the thread through the board to the front for attachment later.

After the bolts are fed through from the rear, you then place rubber stoppers on them and attach mounting brackets.

Noctua supply a long driver which is also used to mount the cooler onto the plate.

The NH D14 is symmetrically designed which means you can mount it vertically or horizontally on Intel motherboards to suit whatever chassis you have. AMD owners don’t get this luxury as they have to mount the cooler based on the direction of the CPU socket.

To get at the mounting screws you remove the center fan and position above the mounted base on the motherboard.

Removing the fan is a pinch because the fan clips are really strong and easy to work with – I used to loathe working with Thermalright fan clips as they frequently would disconnect under even moderate pressure.

The image above shows the underside of the CPU block – the inversed fitting area connects to the CPU mount directly.

A very straightforward procedure which will take about ten minutes first time and probably five if you have to do it again.

Things to watch out for if you are considering this cooler for a purchase. Firstly if you have ram with oversized heatsinks then this cooler will probably not fit. The 120mm fan protudes into the memory area if you have it positioned to expel air out the rear of the case. Installing the cooler in a different direction with Intel, such as blowing upwards can be tricky as the width of the cooler can sometimes mean it will block a graphics card installation – it is very dependent on the specific motherboard you are using. 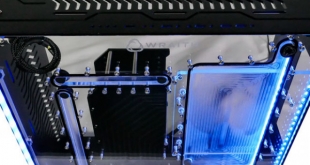 Overclockers UK has added another manufacturer to its arsenal, Singularity Computers will be joining the …