Intel Corp. has decided to delay mass production of its next-generation code-named “Broadwell-E” microprocessor to the first quarter of 2016. Exact reasons for the decision are unclear, but probably the issues with the company's 14nm process technology as well as the lack of competition on the market of ultra-high-end desktop platforms are among them.

The code-named “Broadwell-E” central processing units for high-end desktops will resemble the existing Core i7-5800-/5900-series “Haswell-E” chips and will even be drop-in compatible with LGA2011 v3 mainboards based on the Intel X99 core-logic. The new HEDT CPUs will feature six or eight cores, up to 20MB of last-level-cache, quad-channel DDR4 memory, PCI Express 3.0 lanes, 140W thermal design power and so on.

Unfortunately, the new enthusiast-class chips from Intel will not see the light of the day till the first quarter of 2016, reports Chinese VR-Zone web-site. The world's largest chipmaker plans to start supplying pre-ES samples of the “Broadwell-E” to partners in the second quarter of 2015, engineering samples (ES) are expected to become available on the 36th week of 2015, whereas the final qualification samples (QS) are expected to ship to Intel’s partners on the 47th week of next year. 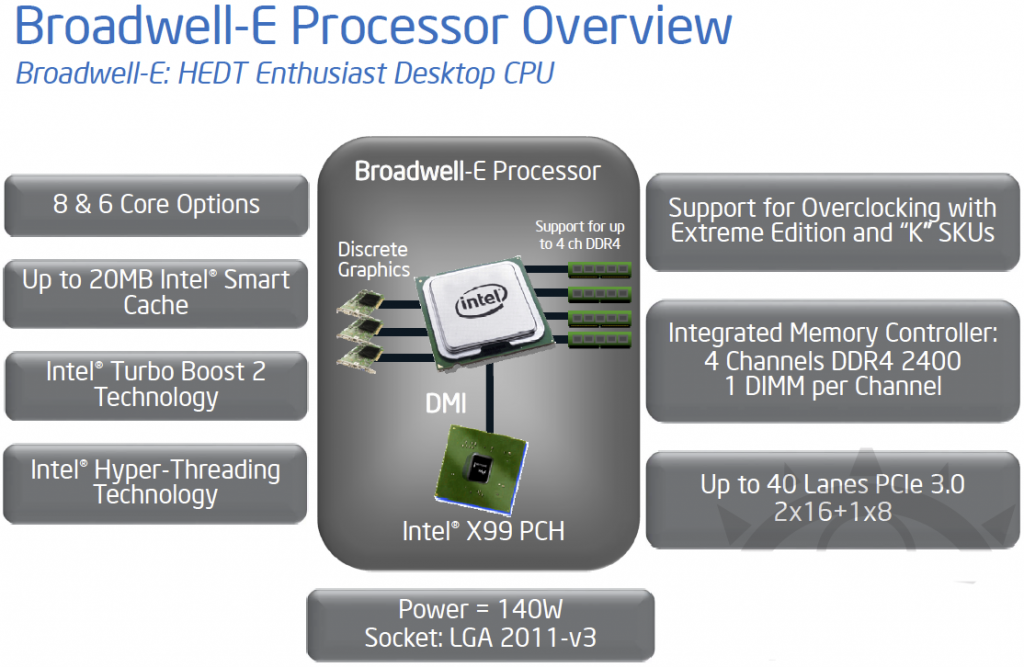 Given the fact that the “Broadwell-E” chips share silicon with the Xeon “Broadwell-EP” microprocessors, it is highly likely that it will also not hit the market in 2015, but will only become available in 2016.

KitGuru Says: On the one hand, Intel does not need “Broadwell-E” any time soon because it has no rivals on the market of high-end desktops. AMD’s FX chips will not become competitive for that segment at least until 2016 when the code-named “Zen” (or “Xen”?) micro-architecture rolls-out. On the other hand, given all the issues with 14nm fabrication process, it is logical for Intel to postpone production of large chips until all the issues with the manufacturing technology are solved. This helps to drive down costs and maximize profits.