While Intel Corp. has officially promised to release its next-generation Skylake microprocessors in the second half of next year, a new market rumour suggests that the company may unveil its first central processing units based on the Skylake micro-architecture already in the second quarter of 2015.

A new version of Intel’s roadmap seen by CPU World suggests that the first Core i5 and Core i7 processors code-named Skylake-S will be released in the Q2 2015. The web-site notes that the Skylake-S products will come with locked multiplier and will thus not address overclockers and enthusiasts. Still, they will be aimed at the high-end of the market. Previously it was reported that the Skylake-S chips are designed for desktop personal computers and will come in a land-grid array packaging.

In the recent years Intel released mobile versions of its chips based on its new micro-architectures first and followed on with desktop products later. However, if the information is correct, for some reason it decided not to keep that tradition in case of the Skylake-S chips. 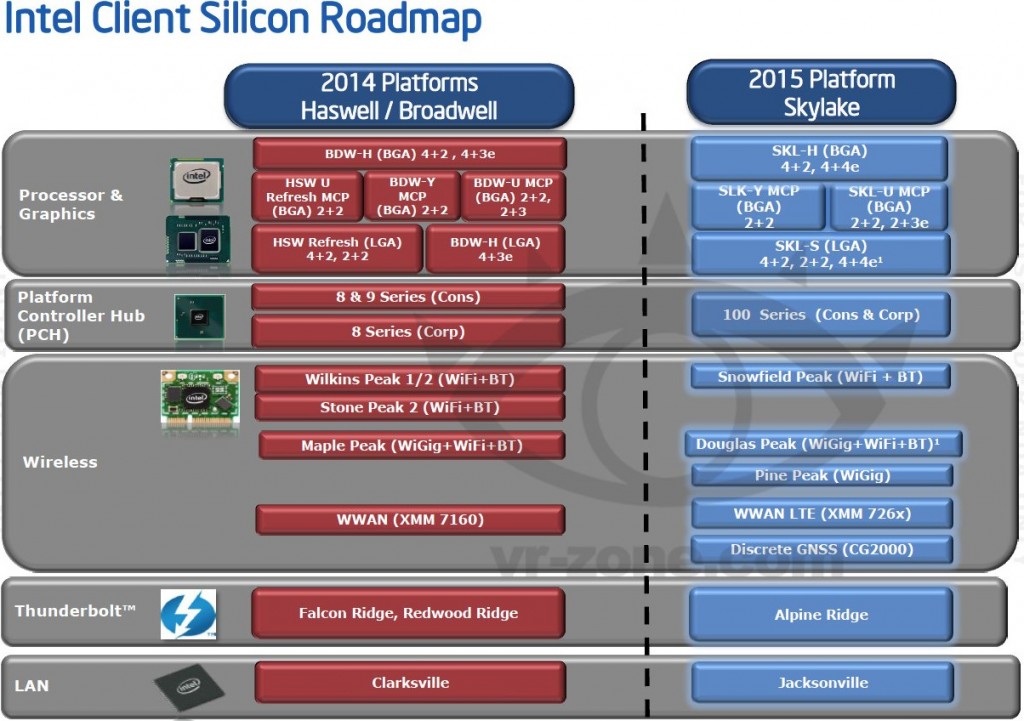 It is interesting to note that despite of the Skylake’s launch in the second quarter of 2015 the company will stick to the current plan and will release the first Broadwell chips for desktops in the Q2 2015 as well. As a result, Intel’s product line-up will consist of CPUs based on completely different micro-architectures, including the Skylake, the Broadwell and the Haswell.

Not a lot is known about Intel’s Skylake in general. It is rumoured that mainstream desktop and notebook CPUs powered by the Skylake micro-architecture will feature four x86 cores, a new high-performance integrated graphics engine (which Intel calls GT4e in its roadmap), a bunch of special-purpose accelerators and a DDR4 memory controller. Various Skylake microprocessors will support such technologies as AVX 3.2 (512-bit instructions), SHA extensions (SHA-1 and SHA-256, secure hash algorithms), MPX (memory protection extensions), ADX (multi-precision add-carry instruction extensions) and other innovations.

KitGuru Says: The reason why Intel decided to release the first Skylake-S chips in the second quarter of next year are not completely clear. The chips will inevitably compete against the code-named Broadwell offerings, which is hardly good for Intel or the PC market.