Soft Machines, a startup that develops microprocessor technologies, has unveiled its own VISC processor architecture. The developer claims that VISC can increase processor’s average number of instructions executed per each clock cycle (instructions per cycle, IPC) by three or four times, thus increasing performance performance-per-watt by two or four times in single- and multi-threaded applications compared to existing microprocessors.

There is a number of ways to boost performance of a central processing unit (CPU), but the most obvious are: to boost its frequency, to increase the number of processing cores, to improve IPC execution. Amplified clock-rates advance performance in single-threaded applications and have little effect on multi-threaded applications; increased amount of cores boosts performance in multi-threaded programs, but has no effect on single-threaded apps; improved IPC brings benefits to all programs, but in the recent years the growth of IPC has been very slow. Tangible improvements of IPC requires addition of new hardware into every core of a multi-core CPU, which makes designs bigger and more expensive.

Soft Machines’ VISC architecture is designed to improve IPC by dynamically allocating resources available in a microprocessor to applications that need just them. Instead of executing code on a complex core that may not be fully utilized at all times, the VISC architecture proposes to create virtual hardware threads and executive them on virtual cores tailored exactly for the threads. Basically speaking, VISC allows to execute a single thread using resources of multiple hardware cores, thus, offering incredible performance. 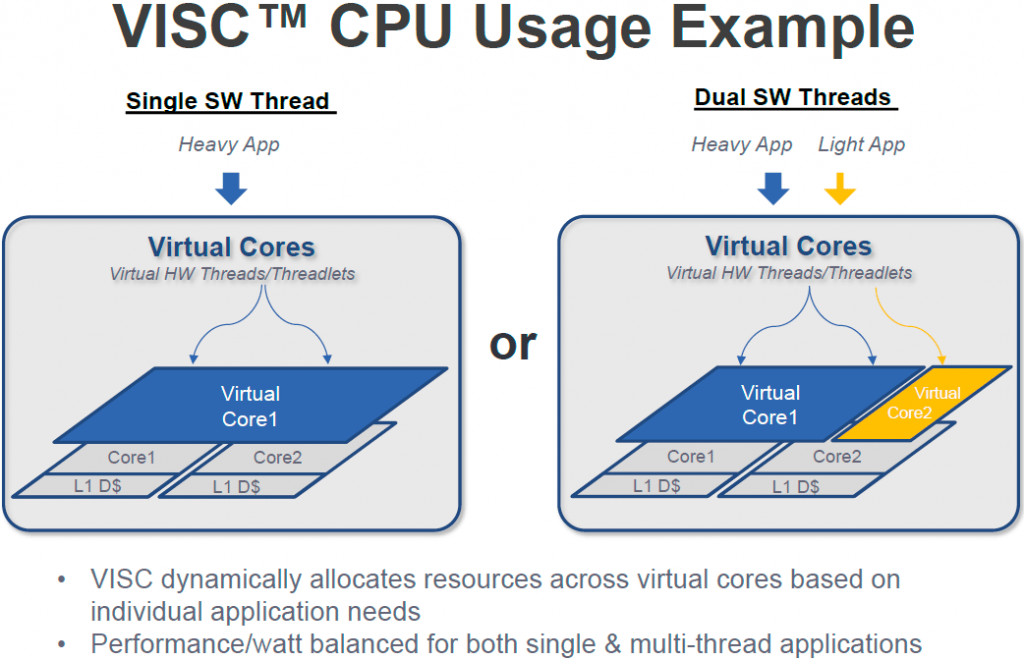 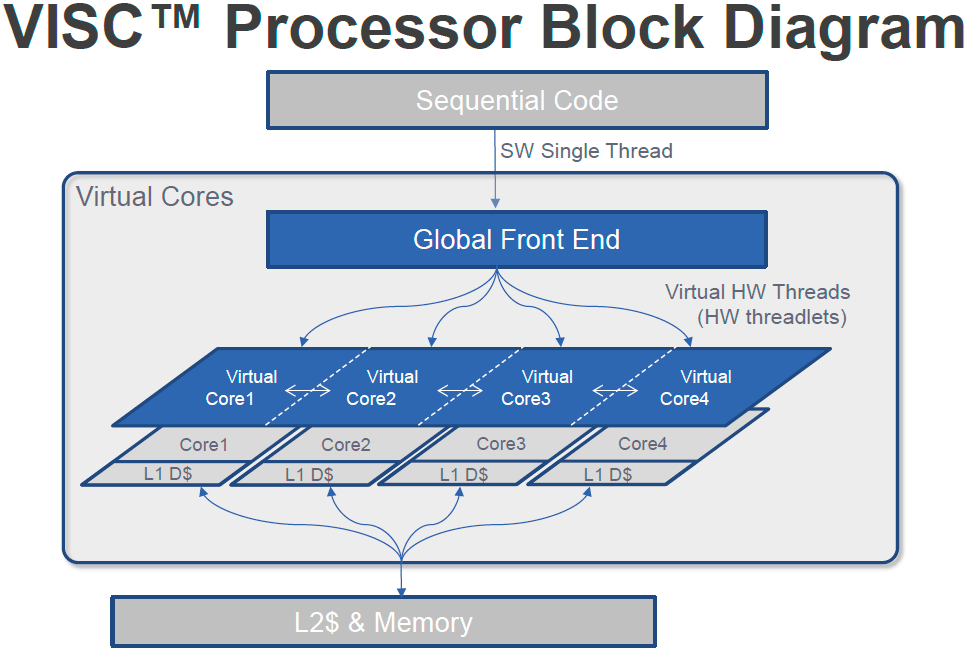 At the Linley Processor Conference last week Soft Machines disclosed some details about its VISC technology. The conceptual block diagram of a VISC processor provided by the company, at first glance, somewhat resembles a block diagram of AMD’s dual-core Bulldozer module, but with dramatically improved communications capabilities and with ability to dynamically allocate resources for a particular task, this is a far cry from anything that exists today. Another major difference is that VISC processors are not going to feature physical CMT modules (like AMD chips), just one global front-end and virtually infinite amount of cores (perhaps, maybe not even exactly cores) that do not conflict for resources (like in the case of AMD’s CMT module, where one FPU is shared between two ALUs and, thus, two threads), but are designed to assist each other. For detailed overview of the VISC technology see a white-paper from Microprocessor Report.

Even though internal layout of VISC microprocessors can be somewhat similar with existing chips, it should be kept in mind that VISC CPUs rely on a unique internal instruction set and unique hardware innovations. In a bid to make programs work on VISC chips, a special conversion layer should be used, just like in case of microprocessors designed by Transmeta more than a decade ago. According to Soft Machines, the conversion overhead from ARM (RISC) to VISC is less than 5%. 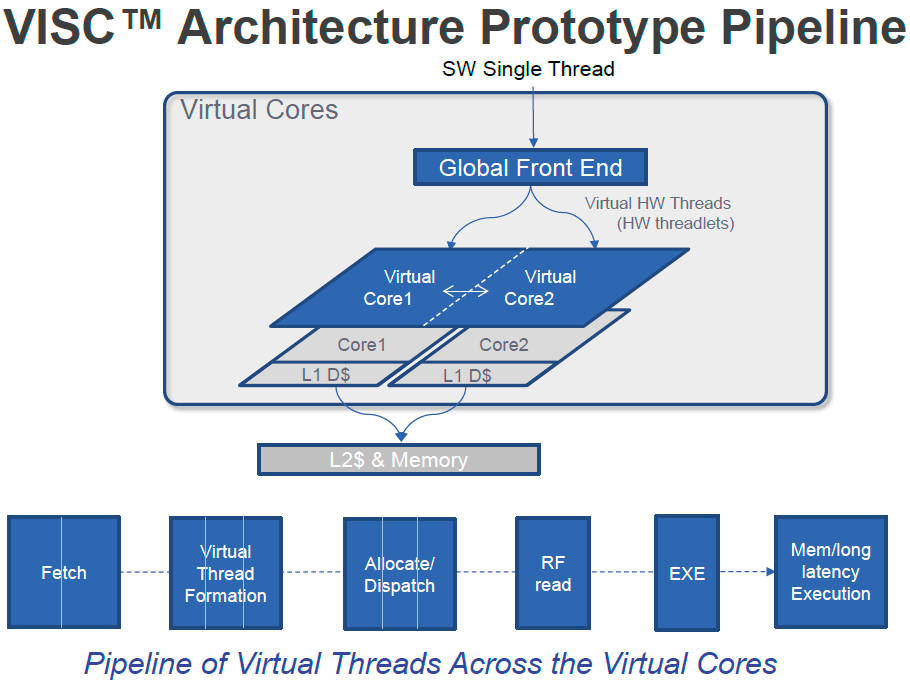 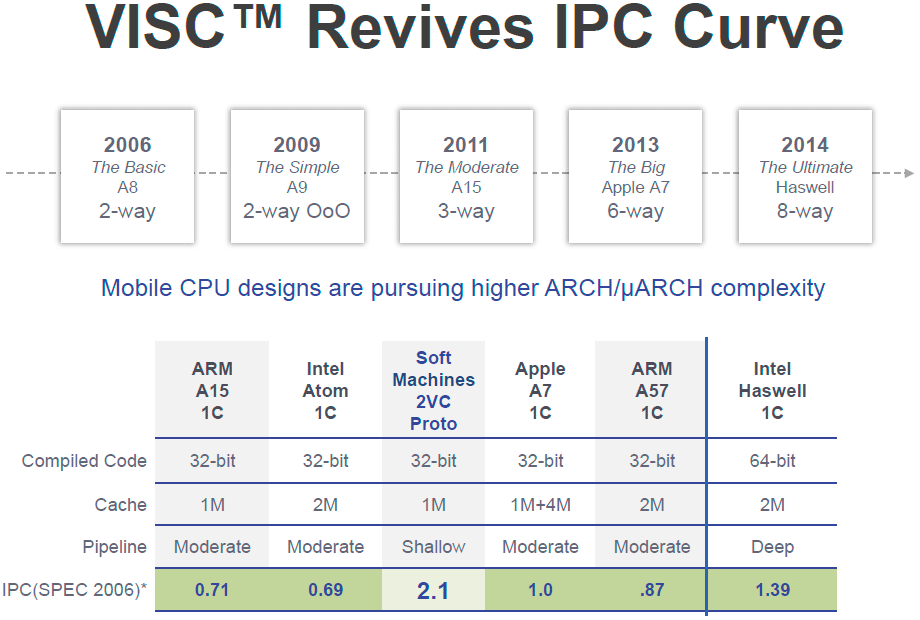 Soft Machines has no plans to produce VISC processors itself, but it intends to license technology to those, who can use it.

Soft Machines was established around 2007 and since then has got $125 million from various companies and organizations, including AMD, GlobalFoundries, Samsung as well as govern-ment investment funds from Abu Dhabi (Mubadala), Russia (Rusnano and RVC), and Saudi Arabia (KACST and Taqnia). Sanjay Jha, chief executive officer of GlobalFoundries, is the chairman of Soft Machines. At present Soft Machines has more than 250 employees and 75+ issued patents.

KitGuru Says: The VISC technology looks pretty promising since it allows to plant itself over virtually all modern processing engines. Therefore, multiple system-on-chip developers can try it without spending an extreme amount of time and money. Then again, just like in case of Transmeta in 1999 – 2000, everything looks very promising on paper. But how well will it all work in real-life in real applications? We will probably find this out in the coming years.