Toshiba Corp. has introduced its first application processor designed for wearable computing devices. The system-on-chip will be available later this year. The new ApP Lite TZ1001MBG chip will power such devices as activity monitors, smart watches, bracelet- and glasses.

Toshiba ApP Lite TZ1001MBG integrates ARM Cortex-M4F processor (with 48MHz clock-rate) with DSP and floating point processing unit and can process a combination of data from multiple sensors, both internal and external, to improve accuracy. The TZ1001MBG processor also features accelerometer; a more advanced version of the chip – TZ1011MBG – will also sport gyroscope and a magnetometer. The SoC features Bluetooth wireless communication technology to connect to external equipment, such as smartphones and tablets. In addition, the chip incorporates NAND flash memory and other necessary ingredients.

ApP Lite TZ1001MBG can hardly be considered truly powerful and will therefore barely be able to enable devices akin to Google Glass, which is based on a fully-fledged mobile SoC that can power smartphones. However, energy consumption of the chip is also very low, which means that devices on its base will work for a long time on battery power. 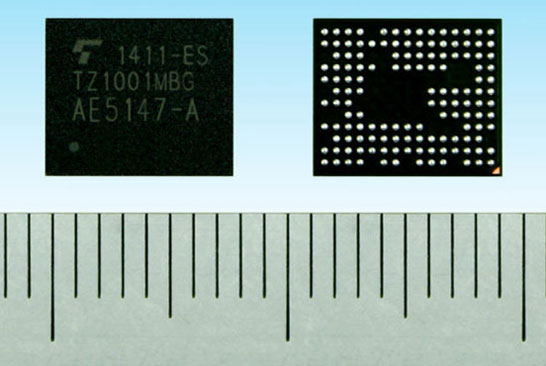 It is unclear whether Toshiba will manufacture wearable computing devices later this year, or will just sell the chip to other companies. Keeping in mind that the company has not truly entered the market of smartphones, making smart-watches or intelligent glasses may not be the right plan for it since offering a range of devices is usually more lucrative than a single type of products.

Sample shipments will start in May, with mass production scheduled to start in September, 2014.

KitGuru Says: It looks like the market of wearable computing devices is really taking off…

Previous Microsoft employees blocked from reading about piracy
Next AMD teases Radeon R9 295 X2 in Twitter: Two is better than one