Earlier this week, readers got their first look at 3DMark benchmarks for what is believed to be the upcoming Intel Core-i9 9900K, showcasing an impressive TimeSpy score that beats AMD’s 8-core Ryzen 2700X. It looks like consumers won’t have too much longer to wait for the new processors, as a leaked roadmap suggests the first 9th generation processors will launch in October, followed by the rest of the line-up in 2019.

While Hong Kong tech site Xfastest has released two conflicting roadmaps yesterday, changing its stance from a 2019 launch for the Intel Core-i9 9900K to Q3 2018, HKEPC has corroborated that Intel’s flagship i5, i7 and i9 chips will indeed arrive later this year. Not only has it ensured readers know the supposedly accurate timetable that Intel is working from, but the site has narrowed the window to October specifically. 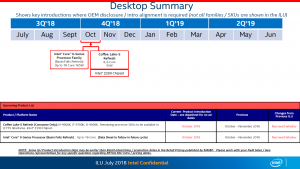 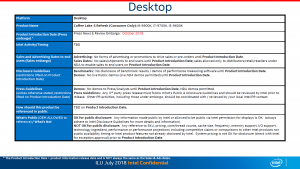 The i9-9900K, i7-9700K and the i5-9600K are all set to continue using the Intel 300-series chipset, launching alongside Z390 motherboards. The release coincides with Basin Falls Refresh, Intel’s Core-X series HEDT platform that will replace everything from the Core i5-7640X to the highest-end Core i9-7980XE with a 165W TDP line-up that still utilises the X299 chipset.

Both the consumer-based 9th generation processors and Basin Falls are said to expand their line-up throughout 2019, adding more SKUs up until the second half of the year. All of these leaks are still just rumours that should be taken with a pinch of salt until Intel addresses its plans in an official capacity.

KitGuru Says: I’m interested in how much progress Intel has made on quelling Spectre and Meltdown issues from the hardware side, but nothing has been said about that for quite some time. Will you be buying into the 9th generation when it launches?

Previous Race to $1 trillion: Apple is edging out Amazon thanks to record third quarter
Next YouTube set to diversify original content across Europe and Asia