The same leaker who shared the codename of the Ryzen 5000 series has shown more of AMD's future roadmap. This time, we get some new details on processors codenamed ‘Warhol', ‘Van Gogh' and ‘Cezanne', as well as their respective successors.

As per the slide from Videocardz (sourced by @MebiuW), Cezanne will be succeeding Renoir and is scheduled for 2021. The Cezanne APU architecture will use the 7nm process node, Zen 3 cores, Vega 7 graphics, and will support LPDDR4x and DDR4 memory. The successor to Cezanne will be named Rembrandt but the roadmap image cuts off before the juicy details – although we can hazard a guess that the letter ‘N' we see means Navi graphics instead of Vega.

The slide also shows that the Van Gogh APU architecture is scheduled to release in 2021. Van Gogh will feature the 7nm process node, Zen 2 cores, Navi 2 graphics and support for LPDDR5 and LPDDR4x memory, hinting that it will be used on mobile devices. Van Gogh will also feature CVML (probably Computer Vision and Machine Learning), which Cezanne doesn't. Although the image doesn't tell us the name of the successor of Van Gogh, @MebiuW confirmed that it will be named Dragon Crest. 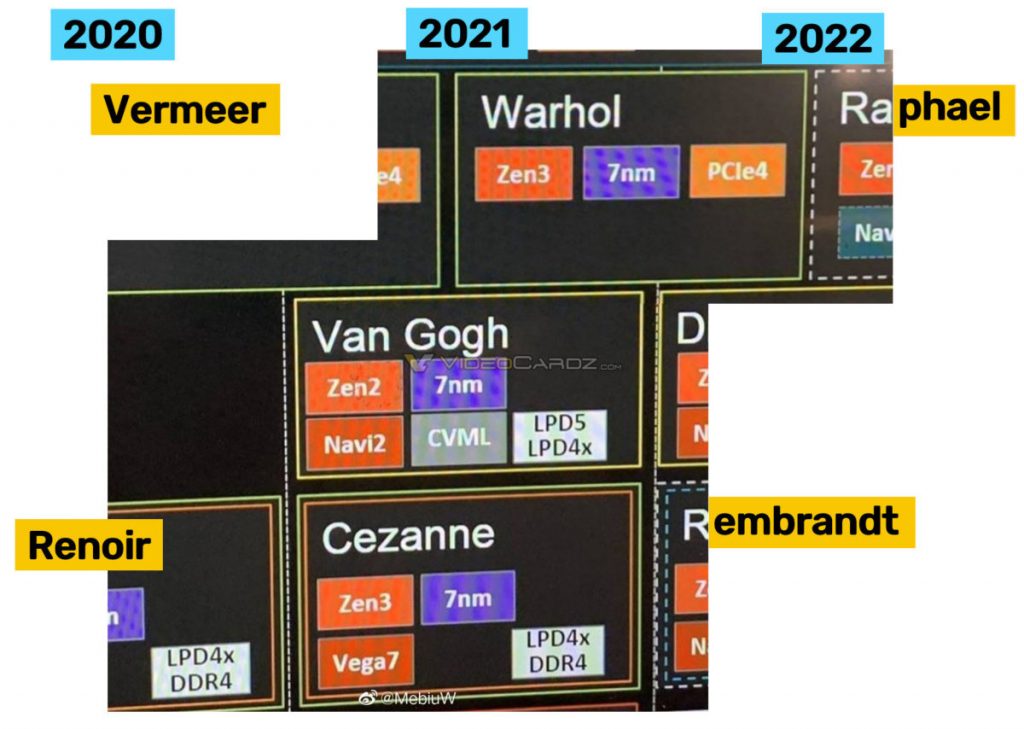 Both Rembrandt and Dragon Crest are expected to release in 2022, and it seems that it will come with Zen cores (2/3/4?) and Navi graphics, given the “Z” and “N” in their respective block diagrams.

Another interesting bit taken from the image is how “Warhol” is placed. With Vermeer expected to release before the year ends and based on Warhol's position in the roadmap, the successor to Vermeer might be a refresh or a “provisional” series to bridge the gap between Socket AM4 and Socket AM5.

KitGuru says: Are you excited about AMD's roadmap? Will Van Gogh give Intel Tiger Lake a run for its money?