Intel recently announced its new 10th Gen Comet Lake desktop CPUs, and motherboard manufacturers have also unveiled a slew of accompanying Z490 motherboards. While there's still no official word about the B460 and H470 platforms, a leaked slide from ASRock shows a feature that allows non-K Intel CPUs to be overclocked with non-Z motherboards.

If we look at Intel's CPU history, non-K CPUs were always multiplier locked, and overclocking was only allowed with “Z” motherboards. Generally speaking, if a buyer wanted to overclock their Intel CPU, one would have to acquire a “Z” motherboard and a “K” processor. Now, it seems that ASRock is trying to break the standard with its new Base Frequency Boost (BFB) technology.

According to the leaked slide shared by Videocardz, BFB technology increases the processor's TDP “to the maximum PL1 value”, allowing the increase of the processor's base frequency. As the slide below shows, the 65W TDP of these processors can be increased to 125W, showing an improvement in the base frequency of up to 42%, per the i9-10900. 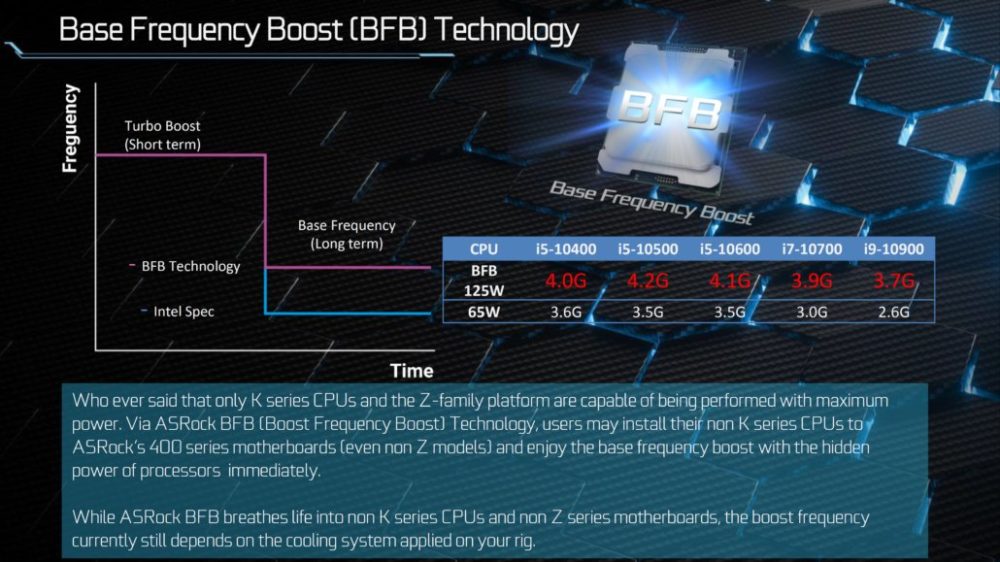 On the other hand, AMD allows all of its Ryzen CPUs to be overclocked on most motherboards (excluding A320). Intel has not yet confirmed whether this will be a feature of the 10th Gen CPUs or whether it is specific to certain ASRock boards.

KitGuru says: Have you ever tried to overclock a non-K Intel CPU with a non-Z motherboard?