After Intel's Ice Lake announcement, it's time for Sapphire Rapids to come into the spotlight. A detailed leak about the upcoming data centre platform has just emerged, suggesting that Sapphire Rapids will be quite the upgrade compared to Ice Lake, with the upcoming Xeons set to feature 64GB of HBM2 memory.

It's worth noting that the image sent to VideoCardz doesn't appear to be entirely recent, as it still lists Ice Lake as a 2020 product. However, the rest of the information does appear to be accurate.

Based on Intel's 10nm Enhanced SuperFin node, the Sapphire Rapids processors are expected to feature up to 56 cores, a maximum TDP of 350W, and can be used simultaneously at up to 8x sockets. Sapphire Rapids CPUs will support up to 8x channels of DDR5-4800 memory and up to 80x PCIe lanes (PCIe 5.0 and 4.0). 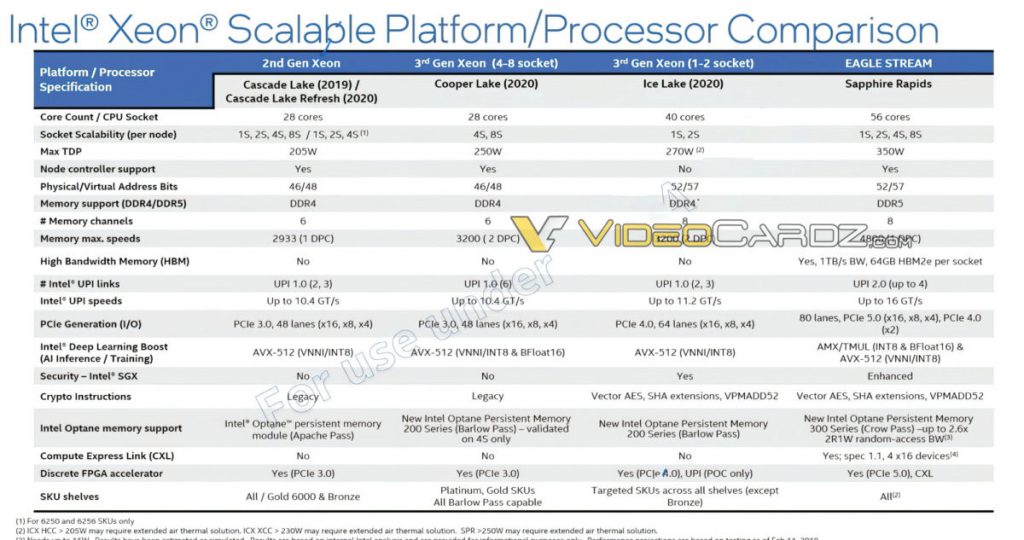 The specification that pops out from the rest is the on-package 64GB of HBM2e memory, offering up to 1TB/s of bandwidth per socket. As for the rest of the specs, these chips will support AMX extended x86 instruction set, AMX/TMUL and AVX-512 instructions set, Optane Persistent Memory 300 series, and feature Intel SGX enhanced security.

Established leaker @momomo_us provided some additional information about the TDP of the Sapphire Rapids platform, claiming that the 56-core processor should come with a 350W TDP, the 44-core SKU features a 270W TDP and the 24-core CPU is rated with a 225W TDP.

Previous Intel’s Xe-HPG with 512 EUs could be faster than RTX 3070
Next New AMD Radeon Pro pictured, to feature Navi 21 GPU and 16GB of memory