Now that AMD has worked its way through the Zen architecture launch with its mainstream Ryzen processors, the company can now start turning its attention to other markets. It has been around a year since we first heard whispers of AMD’s lofty ambitions for Zen in the server/datacentre market but today, the company officially unveiled its codenamed ‘Naples’ CPU. This Zen-based chip carries 32-cores and aims to disrupt the status-quo by bringing some serious competition back to the server/datacentre space.

AMD has officially begun previewing its new Naples CPU, with will be available in Q2 2017, though ‘volume availability’ will be building over the second half of the year through various OEM and channel partners. According to AMD, this preview is the company’s first step into “re-asserting its position as an innovator in the datacentre and returning choice to customers in high-performance server CPUs”. AMD is aiming high with this chip too, going as far as to call it a “ground-breaking chip” that offers “a completely new approach” to dealing with the massive processing requirements of databases. 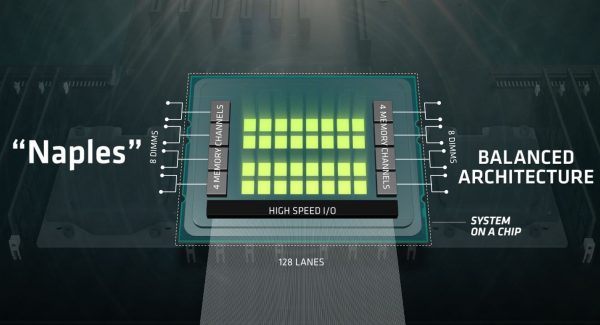 Key features of the Naples CPU include a highly scalable 32-core SoC design with support for two high-performance threads per core and industry leading memory bandwidth with support for up to 32 dimms on 16 memory channels in a dual socket server. This processor also has a fully integrated I/O with support for 128 lanes of PCIe, along with an optimised cache structure for efficiency.

KitGuru Says: AMD managed to impress us all with Zen in the mainstream CPU market, so it very well may end up doing just as well in the server/datacentre market. 2017 is certainly shaping up to be a great year for AMD.

Previous The Switch is apparently Nintendo’s fastest selling console ever
Next WikiLeaks’ Vault 7 dump puts the CIA in a glass cage, reveals operations and spyware tactics