Dr. Delid aims to make delidding your processor a much easier task

Prior to Intel’s Core i7 7700K launch, there was some concern surrounding the TIM used underneath the CPU heatspreader as early reports had shown the Kaby Lake chip running very hot out of the box. Delidding and replacing the TIM seemed to improve things by quite a lot. However, delidding a CPU is a very risky process and completely voids warranty, meaning most people probably shouldn’t attempt it. That said, Aqua Computer does want to try and make the delid process a little easier, with a new tool called ‘Dr. Delid’. 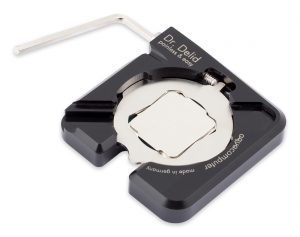 Dr. Delid is a compact tool that can remove the heat spreader on a Skylake or Kaby Lake CPU, allowing you to replace the thermal paste underneath to yield better temperatures. The tool also allows you to reinstall the head spreader securely to reduce the risk of you destroying your CPU.

The tool works by securing the CPU and then slowly twisting the heat spreader across all four corners to gently pry it off. By applying equal pressure to all four corners, you run less risk of damaging the thin PCB of the chip. The idea is that the tool is designed in such a way that it can operate securely without worrying about destroying your CPU, though you should still be cautious. 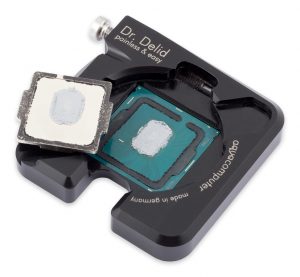 The screw used to apply pressure has a safe stopping point built in so you don’t need to worry about overdoing it. There is also a delid disc which removes the heat spreader while locking down the CPU so it doesn’t just fall out. From there, you can remove the CPU through an opening without touching any of the gold contacts.

Once the thermal paste has been replaced, you can use the tool to re-center the heat spreader and glue it back down. A plastic screw is used to secure the heat spreader in place while the glue cures without causing any damage, it also has a stopping point built in so you can’t over tighten and mess the whole thing up.

Delidding will still void your CPU warranty but from the sounds of it, this new tool tries to make it as safe as possible. It will be going on sale at the end of this week on the Aqua Computers store for 29.90 Euros.

KitGuru Says: We wouldn’t recommend delidding your CPU unless you really know what you are doing and can afford the risk. Still, this tool certainly makes the process sound a little less daunting. Have any of you ever delidded a CPU before? How did it go and did you get good results out of it?