Ryzen might not be in the hands of consumers just yet but it looks like overclockers are already using AMD’s latest and greatest to set overclocking records. This week, a portion of a video from AMD’s Ryzen tech day leaked, at which AMD had professional overclockers pushing the R7 1800x to its limits across all eight cores while running Cinebench R15.

The video in question is from YouTuber Austin Evans who mistakenly uploaded it ahead of the embargo date. Naturally, the clip has been taken down from his official channel but someone was able to download it first and pop it on to Vimeo. In the video, Austin takes a look at a Ryzen 1800x clocked at 5.2 GHz across all cores with LN2 handling the cooling. 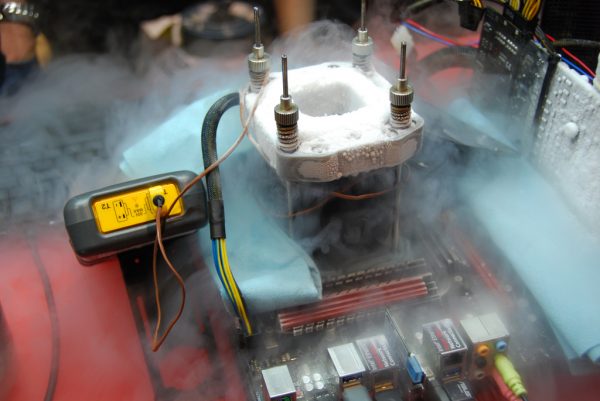 With this, the overclockers (who aren’t named in the clip), were able to set a new world record Cinebench R15 score of 2449 cb, which is up from the previous record of 2410 cb, proving that the top-end Ryzen chip will be very fast indeed.

We have a review in the works for AMD’s new Ryzen CPUs but it won’t be live until sometime next week, so keep an eye out for that. We have all of the details on pricing and pre-orders, HERE. We were also in attendance at the Ryzen tech day, so you can see our first impressions of AMD’s new tech, HERE.

KitGuru Says: Ryzen is shaping up to be very promising, particularly in the high-end. I’m definitely looking forward to seeing the reviews drop next week. Are any of you planning on picking up Ryzen this year? Are you waiting for Ryzen 5 six core CPUs instead?

Previous Bitcoin almost hits highest value ever amid US regulation rumours
Next Dr. Delid aims to make delidding your processor a much easier task