This has been a massive year for CPU launches, with AMD giving Intel a run for their money with the Zen architecture. There are no plans for AMD to slow down next year either, with Ryzen 2 planned for the first half of 2018. How is Intel going to respond on its end? Well according to a leaked roadmap, we can look forward to Cascade Lake-X, Coffee Lake-S, and Gemini Lake chips from the blue team.

Starting at the top, Intel's successor to Skylake-X and Kaby Lake-X is known as ‘Cascade Lake-X'. Not much information about this is present on the roadmap but we do know that it will be coming in Q4 next year, unless Intel moves up the launch again under pressure, as we saw with Skylake-X this year. This will be Intel's next HEDT series and will apparently be based on the 14nm++ fabrication process. 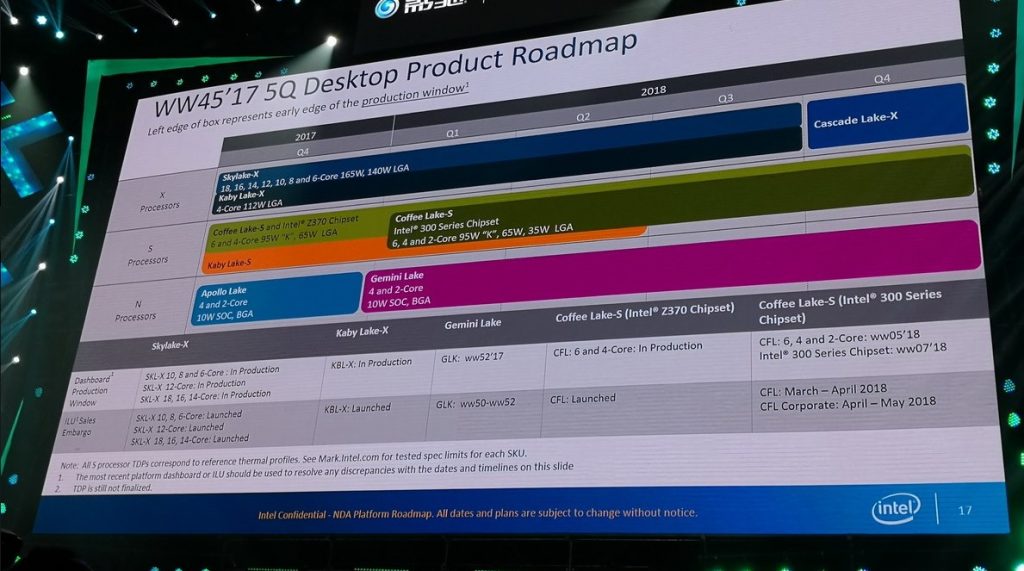 We have already heard some whispers surrounding Coffee Lake-S but this roadmap leak confirms that we can expect these processors to arrive in Q1 or early Q2 2018. This will bring along new six, four and two core CPUs all based on the 300-series chipset. This is also likely when we will see budget 300-series motherboards start to hit the market.

On the low-power end of the spectrum, Intel is also planning a new ‘N series' processor launch for early next year. Taking over from Apollo Lake will be Gemini Lake. These SKUs will come in dual core and quad core variants and are rated to run at just 10 watts, making them a good choice for low power devices that need to save on battery life.

The leak itself came from Chinese site ‘Mydrivers', the original post has been taken down but a reader kindly emailed in a link to this tweet from FanlessTech, containing an image of the entire roadmap. You can see the image for yourself in the picture above.

KitGuru Says: While Skylake-X seemed generally rushed this year, it looks like Intel will be holding off a bit longer in 2018. That said, things could change if Ryzen 2 ends up competing well.