CPU watercooling has become fairly simple over the years, these days you don’t even need to throw together a custom loop, as we have plenty of decent all-in-one units around. So what’s the next step? Well some researchers working at Georgia Tech University have come up with something a little different, using microfluidic passages to cool a CPU on the die itself.

This way of cooling would allow for heat to be extracted directly from the silicon, which would save on space and improve efficiency. According to the report, this method of on-die cooling managed to get temperatures down to 24°C, which is quite the achievement as the report states that the same chip ran at 60°C on air cooling, though load wasn’t specified. 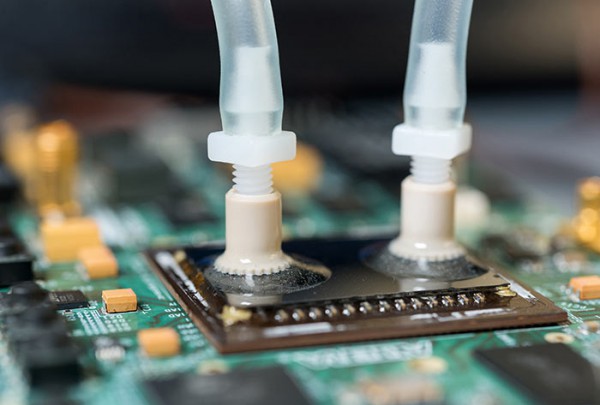 Associate professor Muhannad Bakir and graduate student Thomas Sarvey were responsible for this experiment. Together, the pair used a field-programmable gate array (FPGA) 28nm chip from Altera, with the heatsink and spreader removed. Microfluidic cooling passages were etched in to the silicon, which also incorporated silicon cylinders which measured in at 100 microns in diameter. This was all happening very close to where the chip transistors operate.

From there, a silicon seal was used for the fluid passages and de-ionised water was pumped through, with the inlet allowing 147 millilitres of water to pass through per minute. According to the research report, this method could be applied to both CPUs and GPUs, which could drastically improve temperatures and efficiency. You can find the full report, HERE.

KitGuru Says: We are all pretty big fans of watercooling here at KitGuru but this demonstration is really something else and could have implications for the future of watercooling. How many of you run a custom water loop in your system? Would you feel safe cooling a CPU directly from the die?