Advanced Micro Devices this week introduced its first graphics processing unit for embedded applications that is based on the latest GCN [graphics core next] architecture. The new Radeon E8860 will bring graphics capabilities of embedded applications to the level of new-generation video-game consoles, such as Microsoft Xbox One and Sony PlayStation 4.

AMD GCN architecture was introduced in late 2011 and by now has become the dominant technology in AMD’s product lineup, even the latest A-series APUs [accelerated processing units] feature Radeon graphics cores powered by the GCN. AMD has also integrated its latest graphics processing tech into the new-generation PS4 and Xbox One game console. The only market that has not yet been addressed by the GCN is the market of graphics chips for embedded applications, which has a number of specific requirements, such as supply longevity, ability to work in various harsh environments, broad support of operating systems (including real-time OSes) and so on. 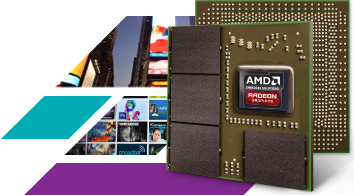 Thanks to GPU architecture optimized for general-purpose computing, the Radeon E8860 can support complex parallel applications like terrain and weather mapping, facial and gesture recognition and biometric and DNA analysis. This greatly enhances markets the new solution can address.

KitGuru Says: AMD’s current business strategy implicates increased attention to the market of embedded applications. Therefore, it is logical to finally release a GCN-based offering for such appliances that need discrete graphics solutions. Unfortunately, even under the new strategy, it took AMD about two years to develop a software package for its Cape Verde XT GPU (introduced in early 2012) that allows it to be used by embedded devices.