Advanced Micro Devices said that it will not introduce an all-new GPU micro-architecture next year, but will significantly improve its GCN [graphics core next] technology to boost performance and energy-efficiency.

AMD originally introduced its graphics core next (GCN) architecture in late 2011 along with its Radeon HD 7970 graphics card (eventually renamed to Radeon R9 280X). The GCN architecture has gradually evolved in terms of feature-set and performance since its commercial launch, this year AMD is expected to introduce the fourth iteration of GCN in the form of the code-named “Fiji” graphics processing unit. The GCN 1.3 GPUs will feature an all-new memory controller and cache sub-system along with a number of new capabilities that are supported by Microsoft Corp.’s DirectX 12 application programming interface.

Without any doubts, AMD’s graphics processing units gained a lot since late 2011. In fact, performance increase that the upcoming flagship Radeon R9 graphics card is expected to deliver over the original Radeon HD 7970 should be incredible. What is remarkable is that all performance improvements demonstrated by the latest Radeon graphics adapters should be attributed to architectural enhancements because all GCN graphics processing units have been made using essentially the same 28nm fabrication technology.

Typically, evolution of graphics processors is a result of architectural innovations and thinner manufacturing processes. Unfortunately, new production technologies is a luxury that graphics processing units from AMD and Nvidia did not have in the recent years since TSMC had decided to focus solely on mobile system-on-chips with its 20nm CLN20SOC process. But a lot will change next year, when both TSMC and GlobalFoundries begin to offer their 16nm and 14nm FinFET fabrication processes, which can be used to produce high-end graphics processing units. 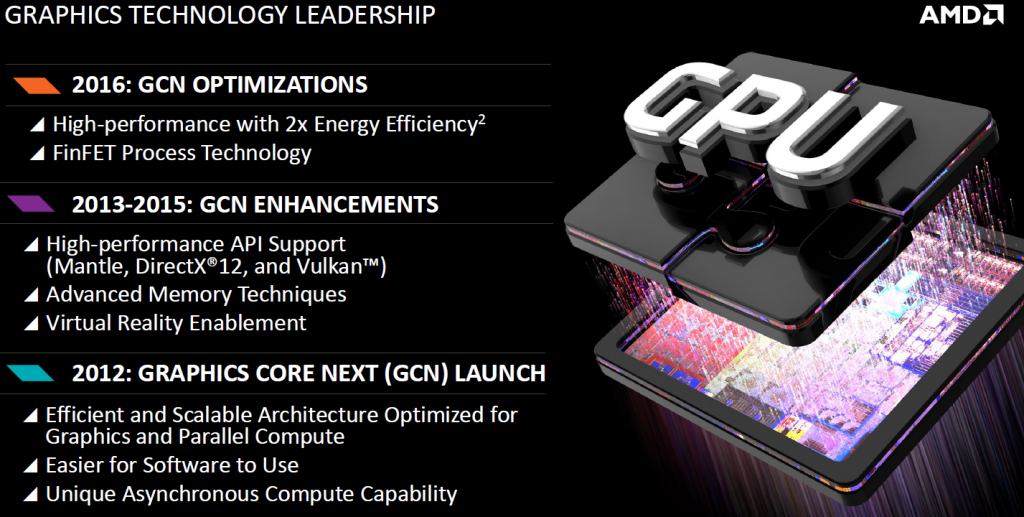 Next year AMD plans to release a yet another iteration of GCN architecture (GCN 1.4) that will be two times more energy efficient compared to existing GPUs and will support some new features, including those that accelerate virtual and augmented reality applications. AMD’s 2016 graphics processing units will be made using a FinFET process technology, which will let AMD install more stream processors and a variety of other hardware that further boosts performance into its next-gen graphics processing units.

“Raja Koduri and his team at Graphics [unit] are not stopping, like in the case of CPU cores, we are always working on next generation,” said Mark Papermaster, chief technology officer at AMD at the company’s financial analyst day. “We are tweaking the GCN to make it even more energy efficient. We are going to drive optimizations in workloads where we already excel with GCN, such as machine learning and a number of artificial intelligence applications. There is more innovation to come.” 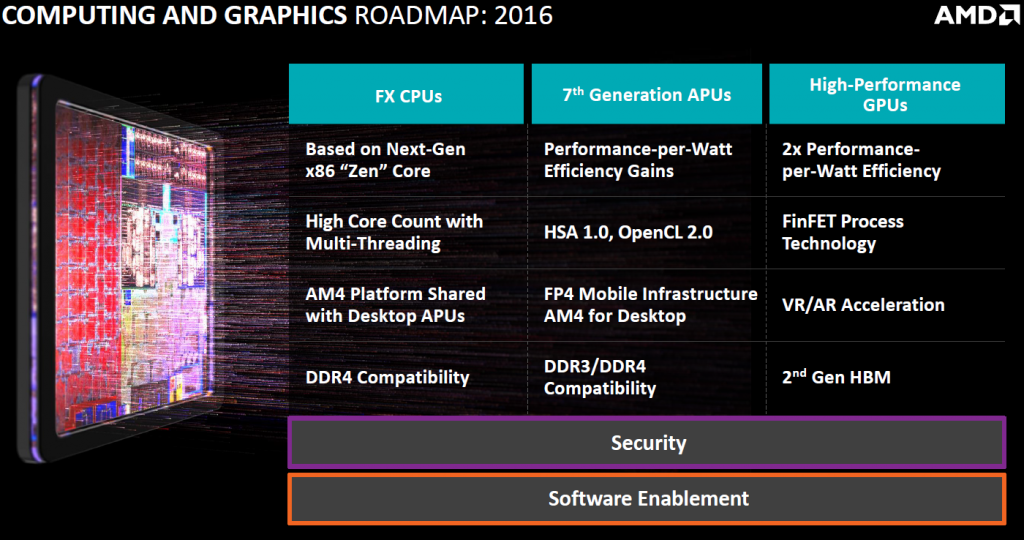 While AMD does not reveal a lot of information regarding performance of its next GPUs, two times higher energy efficiency could potentially translate into two times higher performance in the same power envelope. Since AMD’s future Radeon graphics chips code-named “Greenland” will use second-generation high-bandwidth memory (HBM 2), it is highly likely that their performance will not be constrained by memory bandwidth. As a result, we could see a giant leap of GPU performance next year thanks to architectural improvements, increase of compute horsepower thanks to new process technologies as well as HBM 2 memory.

KitGuru Says: AMD will not be alone with GPU performance gains. Nvidia Corp. will also benefit from newer process technologies, next-gen architecture code-named “Pascal” and HBM2 memory. Apparently, 2016 is going to be an interesting year for graphics cards.