AMD’s ‘Hawaii’ GPU may be more powerful than advertised

The Hawaii GPU that’s behind AMD’s latest R9 series of cards, is clearly among the highest-performing chips available at the moment. However, a new die shot of the chip implies that the graphics processor may actually be more powerful than AMD publicly disclosed.

DG’s Nerdy Story has obtained this first die-shot of Hawaii GPUs from an undisclosed source. According to this shot, Hawaii should have 3072 SPs, 192 TMUs and 64 ROPs. The information should be taken with a grain of salt though as the authenticity of the image cannot be verified right now. Moreover, the guesses of the journalist may also not be completely correct. 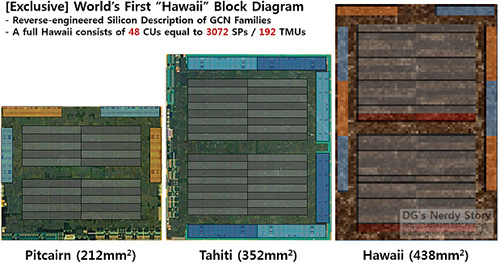 Chip designers in many cases integrate redundant execution units into their products in a bid to have more processors with specifications that meet their performance targets. For example, accelerated processing units inside Microsoft Xbox One and Sony PlayStation 4 feature more compute units than “officially” is needed. This allows it to ensure that more chips meet the specs even in cases there are issues on the manufacturing level. Moreover, Nvidia Corp.’s GK110 GPU that powers such graphics cards as GeForce GTX 780, GTX 780 Ti, GTX Titan and several Quadro professional graphics cards, includes as many as 2880 SPs, 240 TMUs and 48 ROPs; but only the GeForce GTX 780 Ti and Quadro K6000 actually use the GK110 in its full configuration, whereas other graphics solutions sport differently-configured GK110 chips.

The existence of additional compute units inside AMD’s Hawaii not only allows the company to boost production yield of the new GPU, but also to release more powerful graphics adapters eventually. Unfortunately, we do not know whether the Sunnyvale, California-based chip designer has plans for a new Radeon graphics card for the enthusiast market, or indeed, whether modders and hackers may be able to unlock this extra performance on their own.

KitGuru Says: Higher-performing graphics cards will clearly be appreciated by those who have monitors with 3840*2160 (4K) resolution. But are there a lot of gamers with such displays today?