Asustek Computer is well-known for innovative cooling solutions for its graphics cards. Those coolers not only allow the company to offer factory-overclocked graphics adapters, but also to make its boards quieter compared to reference designs by AMD or Nvidia. This month the company made one step closer to perfection, it introduced two high-performance pre-overclocked graphics solutions with 0dB fan technology. The new Strix-series graphics boards will be absolutely silent under light loads.

The Asus Strix R9 280 3GB (based on the AMD Tahiti GPU with 1792 stream processors pre-overclocked to 980MHz) and the Asus Strix GTX 780 6GB (powered by Nvidia GK110 GPU with 2304 stream processors pre-overclocked to 889MHz/941MHz [base/boost]) graphics cards feature completely redeveloped design (compared to the references by AMD and Nvidia) and come with highly-efficient DirectCU II cooling solutions with two advanced fans that were “enhanced” with the 0dB fan technology.

Thanks to Asus Digi+ 10-phase voltage-regulation modules (VRMs) that reduce power noise by 30 per cent and enhance energy efficiency by 15 per cent as well as extremely hard-wearing polymerized organic-semiconductor capacitors (POSCAPs), the graphics boards reduced their power consumption, improved general stability and gained durability. All of these improvements allow the Asus Strix graphics cards to keep the fans off (and thus run in the so-called “passive mode”) when the GPU temperature is below 65°C. As the GPU temperature reaches 65°C, the fans spin up slowly, with lowest setting at 300RPM, and ramp up in direct relation to any increasing temperature in order to maintain the best performance and stability. 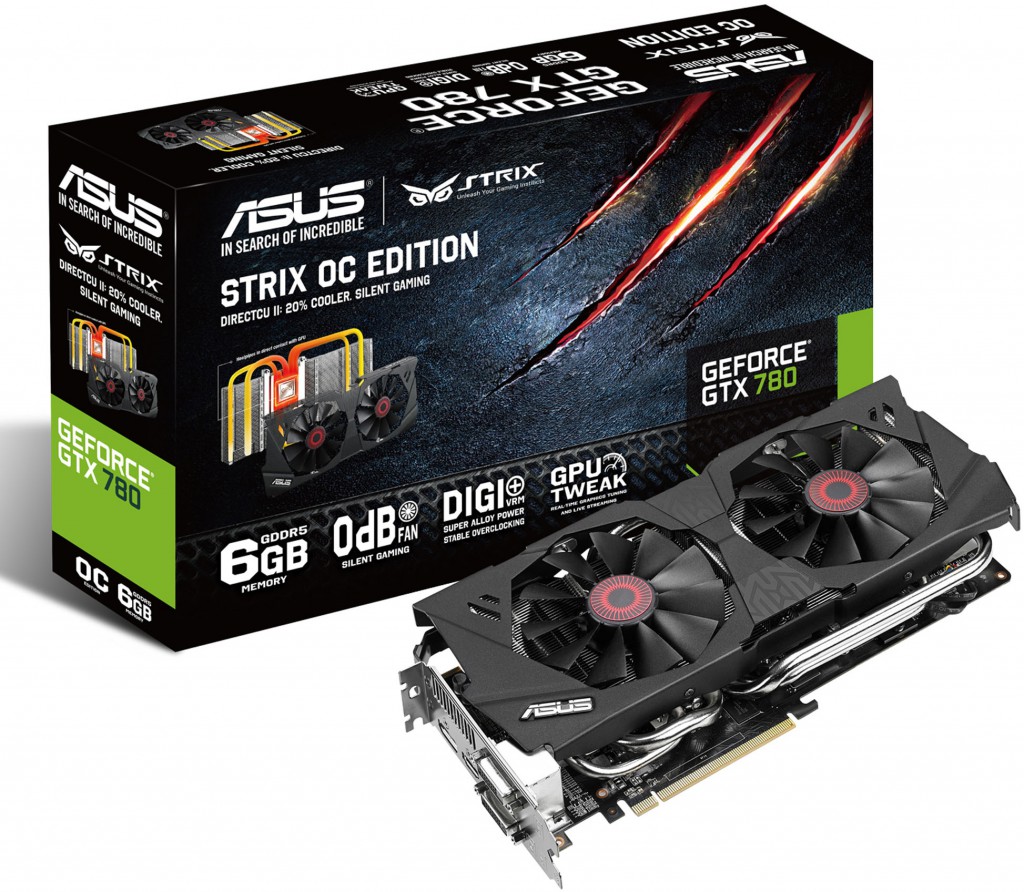 Usually the GPU temperatures in idle mode or under general workloads are in the range between 30°C and 45°C, which means that the Asus Strix R9 280 3GB and the Asus Strix GTX 780 6GB will be completely silent when users surf the Internet or work with texts/spreadsheets.

As noted in KitGuru’s review of the Asus R9 290X Direct CU II OC, this wasn’t the quietest video card we have ever tested, emitting around 36dBa of noise under normal gaming load and 28dBa in idle mode. The same was said about the Asus GTX 780 Ti Direct CU II OC graphics solution in our review. In both cases we came to the conclusions that triple-fan coolers were less noisy than dual-fan coolers used by Asustek. The new 0db fan technology from Asust eliminates any noise when the GPU temperature is below 65°C, which means that the Strix-series graphics cards with 0dB fan tech may remain absolutely quiet even when users play non-demanding video games. But what happens under load of demanding games that push the GPU temperatures to 75°C or higher? That’s probably something, which one of our next reviews will find out.

Pricing of the new Strix-series graphics cards have not been announced.

KitGuru Says: The idea of turning off the fans in idle mode or under light workloads is definitely a good one. However, the dual-fan configurations seem to be rather noisy in general. Perhaps, Asus should wed the 0dB fan technology with three fans?

Previous Apple: We have the best product pipeline in 25 years
Next Apple Mac Pro finally ships immediately after purchase