A web-site has published alleged benchmark results of next-generation graphics cards from Advanced Micro Devices and Nvidia Corp., such as code-named “Bermuda XT”, “Fiji XT” as well as GM200. Without a lot of surprises, the new single-chip graphics solutions from AMD and Nvidia will offer a noticeable performance improvement compared to today’s solutions, but all of them will be slower than the Radeon R9 295X2.

Chiphell, a Chinese web-site with mixed track-record when it comes to leaking details about unannounced hardware, has published what it claims to be benchmark results of multiple next-generation graphics cards – including “Bermuda XT”, “Fiji XT”, “GM200” and cut-down “GM200” – in five benchmarks, including Battlefield 4, Call of Duty: Advanced Warfare, Dragon Age: Inquisition, Ryse: Son of Rom and Watch Dogs: Bad Blood. Exact benchmark settings have not been revealed, but they are claimed to be “high” or “max” and the resolution was 3840*2160. 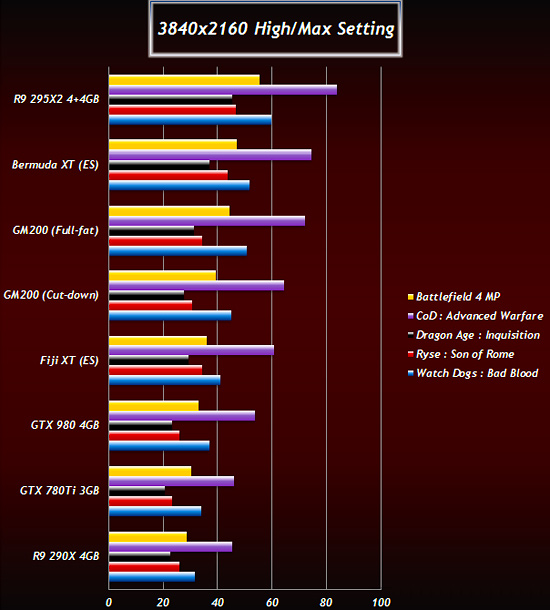 While the alleged benchmark results pose certain interest, it should be noted that their authenticity is under a huge question mark. While it is possible that an employee of a graphics cards supplier has decided to test several unreleased graphics adapters and share results with media, this does not happen often. At present, very few third parties outside of graphics cards supply chain own next-generation graphics cards from AMD and Nvidia. Those third parties mainly include software developers, who also rarely share test results with the press.

Given the fact that neither the “Bermuda XT”, nor the “Fiji XT” nor the “GM200” are commercial products, their specifications (e.g., GPU configuration, clock-rates, etc.) are subject to change and so is performance.

KitGuru Says: If the whole set of numbers is not a fake, then it is noteworthy that someone in the supply chain (or at a software maker) already has all three upcoming graphics boards at hands. The only question is why that someone would want to share test results with the public.