While livestreaming is more accessible than it’s ever been before, many professionals continue to utilise a second PC in order to maximise performance. Nvidia is aiming to make this a thing of the past, as the latest version of OBS has improved support for the company’s proprietary NVENC hardware encoder, resulting in consistently better frame rates.

Dual PC arrangements often consist of one dedicated gaming system while a second setup handles high-quality CPU software encoding for the livestream. The expenses don’t stop at the two systems, as users often have to double up on peripherals, add an audio mixer and purchase a capture card. To alleviate system strain on a single PC setup, streamers often use their graphics card to encode rather than their processor; however this has been known to impact the frame rate of the game, and therefore the stream. 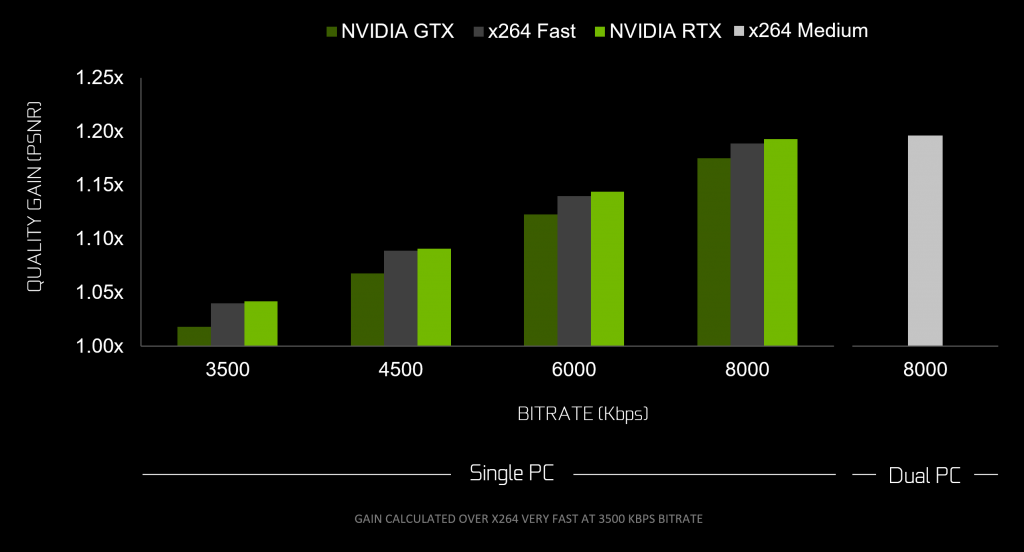 Nvidia announced its collaboration with OBS to rid these limitations, promising that “the new OBS Studio, version 23, reduces the FPS impact of streaming by up to 66% compared to the previous version.” Internal testing from the manufacturer shows that framerates are increased by up to 48% compared to NVENC’s predecessor x264 Fast, and 27% compared to x264 Very Fast in games like Fortnite, Call of Duty: Black Ops 4 and Apex Legends.

This should provide a much-needed boost to anyone with a GTX 600-Series onwards, but the primary focus still seems to be Nvidia’s newer RTX range of cards. This is thanks to “architectural improvements” with Turing that makes RTX GPUs up to 15% more efficient than their Pascal forerunners and supposedly allow the newer cards to “improve image quality at reduced bitrates.”

OBS Studio version 23 is already available to download on Windows, macOS and Linux from the official website. The same improvements will come to StreamLabs OBS “in the near future.”

KitGuru Says: Streaming is a highly competitive scene that should really entice people for monetary reasons, but many newcomers are still intimidated by the sheer amount of production value seen in professional setups. Hopefully this takes the pressure off a little bit, allowing people to easily get into the swing of things.

Previous Motorola’s foldable smartphone is coming, with hints at a Razr clamshell design
Next Obsidian hints of a larger franchise behind The Outer Worlds, with multiple teams at work