I must admit that Anidees was an unfamiliar name to me until recently. The company produces a range of PC components including fans, cases and peripherals, along with a few designs which are a break from the norm but could prove to be just as useful.

A recent addition to the Anidess range includes an interesting graphics card cooler, which also adds a little colour to the system as well as providing extra airflow to the GPU. The Anidees RGB VGA Cooler utilises a PCIe mount and features three 80mm RGB fans incorporated into a frame, which resembles the shape of a graphics card. 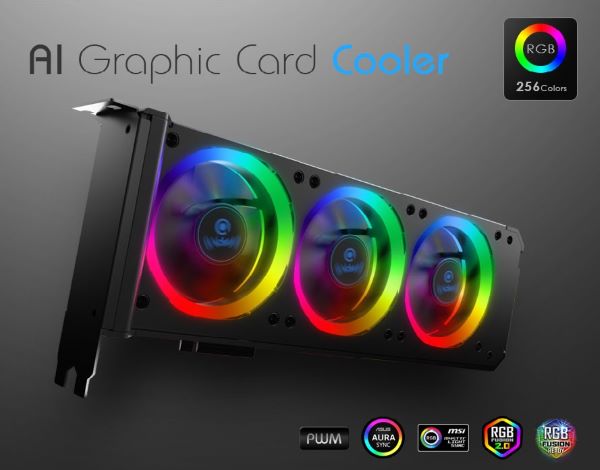 The 80mm RGB fans feature PWM speed control for dynamic RPM adjustment between a 600 and 1200 RPM range, so users can balance fan speed with noise to finely tune the device to their requirements. A single SATA power cable is used to power the device with a 4-pin PWM cable to connect the fans to a motherboard fan header. A 5V 3-pin addressable RGB cable is integrated into the device too, so connecting to motherboard LED headers should be a simple process.

KitGuru says: This is a rather interesting piece of kit. Maybe not something which would reduce GPU temperatures on cards with stock cooling, However, with cards fitted with a universal GPU water block, this device could help keep VRM and memory temperature under control by providing extra airflow.