This is set to be a big year for AMD with so many highly anticipated releases set throughout the course of 2016 and it looks like things are starting off strong as the Radeon team has shown off its new Polaris GPU architecture, which is designed and optimized for the 14nm FinFET process.

The Polaris GPU brings forth the largest generational jump in performance per watt in the history of AMD GPUs. From the sounds of it, this new architecture will be used to make graphics cards for small form factor PCs, bringing better performance at a lower power cost. 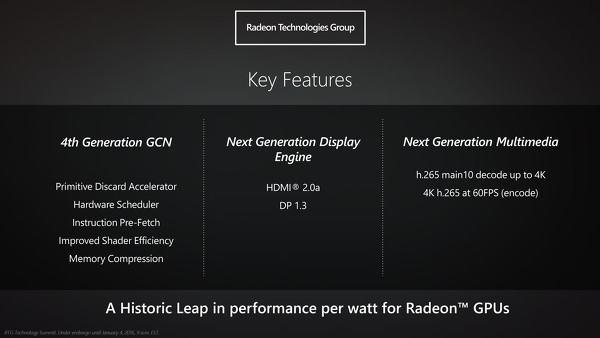 AMD’s own internal tests show that in a game like Star Wars: Battlefront, the new Polaris GPU can maintain a steady 60 frames per second on medium settings at 1080p while using just 86 watts of power, which is just over 60 percent less than the 140 watts that the GTX 950 currently pulls running Battlefront at the same settings.

The Polaris Architecture is based on the fourth generation of GCN, so it’s not just power efficiency that is getting improved, we will also see improvements made to memory compression, the hardware scheduler as well as support for outputs like HDMI 2.0 and DisplayPort 1.3. This is all just a preview for now but as the year goes on, we will likely hear much more, particularly since shipments of the first Polaris GPUs are expected to arrive in mid-2016.

KitGuru Says: AMD has a lot of launches planned for this year and it seems like Polaris might be a pretty strong start. Are any of you currently waiting on new GPU launches from AMD or Nvidia?