Yesterday during AMD's Financial Analyst Day, the company gave insight into future releases, including new CPUs and GPUs for 2020 and beyond. The roadmaps cover the next two years, with AMD planning more RDNA based graphics cards, as well as Zen 3 and Zen 4 processors.

We will start off with GPU news first, as AMD has revealed that its upcoming RDNA 2 architecture will provide a 50 percent boost to performance per watt compared to RDNA 1. The new architecture upgrade will also support hardware accelerated ray-tracing for the Xbox Series X, PS5 and upcoming PC graphics cards. We don't have technical details on AMD's ray-tracing solution but we will be seeing it in action this year.

Unfortunately, the current timeline for RDNA 2 GPUs is ‘late 2020', lining up the launch with next-gen consoles. RDNA 3 is also on the roadmap for a launch between 2021 and 2022. 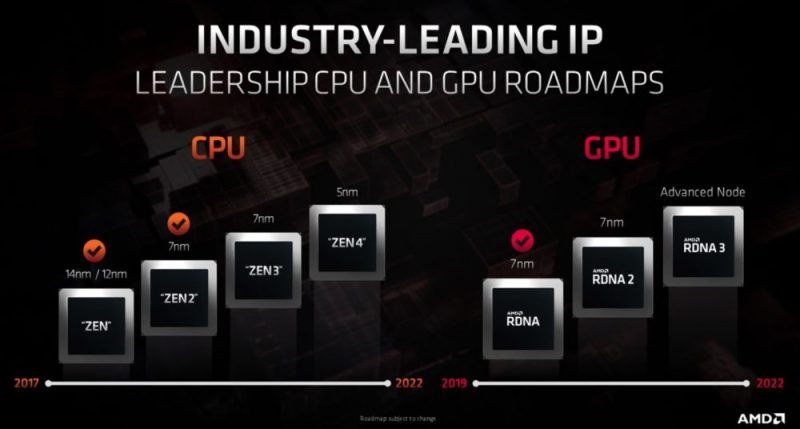 As has been the case each year since the launch of the original Zen architecture, AMD is going to continue to be aggressive with its upgrade roadmap. Zen 2 was a huge success last year and so far, Zen 3 processors are on track to launch this financial year, giving us a window of anywhere between now and March 2021.

With Zen 3, AMD will continue using the 7nm process node but by 2022, AMD will be making the jump to 5nm processors based on the Zen 4 architecture.

KitGuru Says: We didn't get technical details but AMD's portfolio is shaping up well for the next 18-24 months with plenty of upgrades on tow. It will be a while until we see all of this new hardware in action though. What do you all think of AMD's current GPU and CPU release plans?