Earlier this week, RX 6600 XT rumours came to a head, with reports of an announcement taking place during this year’s Chinajoy event. The event is still hours away, but it would seem that we’ve already got confirmation of the GPU through Gigabyte.

The Gigabyte Aorus Spanish-language Twitter account tweeted an image this afternoon, showcasing the company’s two custom-cooled RX 6600 XT graphics cards. The first is an RX 6600 XT EAGLE while the other is an RX 6600 XT Gaming, both of which include a triple-fan cooler design. 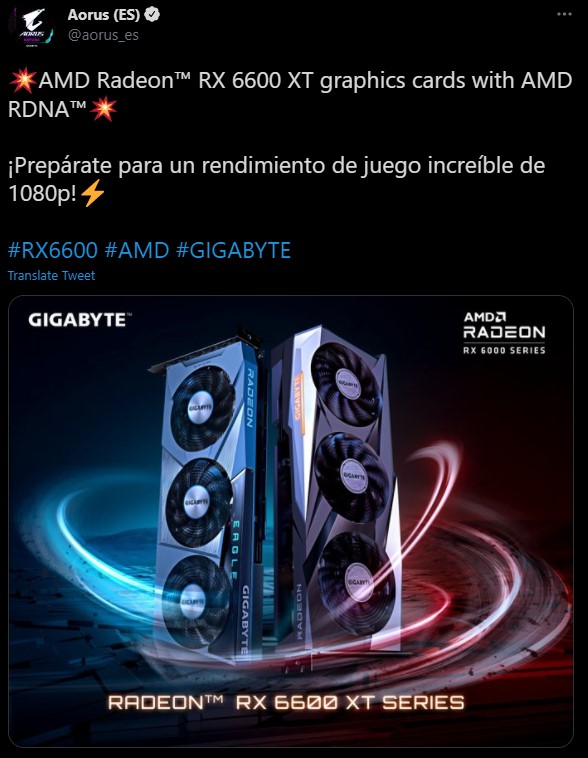 The tweet itself describes these graphics cards as “incredible for 1080p gaming”, giving us an idea of the performance level AMD is targeting with this new GPU. Currently, the RX 6600 XT is expected to be officially announced at Chinajoy, with retail availability following on the 11th of August.

As reported by VideoCardz, the RX 6600 XT is expected to feature a Navi 23 GPU with 2048 Stream Processors and 8GB of GDDR6 memory across a 128-bit bus, delivering a maximum bandwidth of 256GB/s. As with other Navi GPUs, there will also be some Infinity Cache on board, in this case, 32MB.

KitGuru Says: Have any of you been waiting on new ‘mainstream’ graphics cards before upgrading? Are you going to be trying to get your hands on an RX 6600 XT?