Today, Razer announced the latest edition to its highly praised ‘Blade' line of gaming laptops. This time around, though, Razer is doing things a little differently by releasing a 12.5-inch Ultrabook that will pair up with the Razer Core, a powered GPU enclosure for those that still want the desktop gaming experience, in addition to the portability of a thin and light laptop.

The Razer Blade Stealth comes with an Intel Core i7-6500U processor as standard, which is a dual-core model with Hyper-Threading and Intel HD Graphics 520. It comes in both 1440p and 4K options, with storage ranging from 128GB, 256GB and 512GB just like the rest of the Blade laptops. 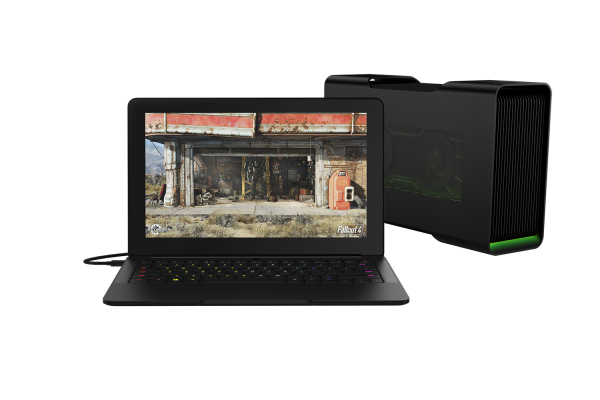 Obviously integrated graphics isn't going to do the job when it comes to serious gaming, so those that still want to game while at home will need to pick up the Razer Core, which is sold as a standalone product. It's essentially an external graphics card enclosure, using a thunderbolt 3 connection to allow you to hook the Razer Blade Stealth up to a more powerful GPU.

The Razer Blade Stealth is actually already available in the US, starting at $999 for the base model. However, we don't currently have an international release date for Europe or other countries. There is even less information right now about the Razer Core, which doesn't have a price yet but is due to ship sometime in the first half of this year.

KitGuru Says: It is great to see laptop makers experimenting with external GPU enclosures for those that want portability in addition to desktop gaming performance. Though this is still quite an expensive setup to pick up. What do you guys think of Razer's announcements today? I certainly wouldn't mind carrying around one of those Ultrabooks.