A year, almost to the day, after launching the original Radeon Pro Duo dual-chip workstation-class graphics card, AMD has announced a refresh to its professional line-up.

During the NAB 2017 show (an event for the broadcasting industry) in Las Vegas yesterday, AMD announced a new version of the Radeon Pro Duo now with a Polaris-based dual-GPU at the core. The identically-named Radeon Pro Duo card comes with 32GB of GDDR5 (16GB per GPU) and 4608 stream processors delivering 11.45 Teraflops of compute power. It is also a bit cheaper, less power consuming and a whole lot cooler – to the point where AMD has done away with the integrated waterblock/fan/radiator combo. 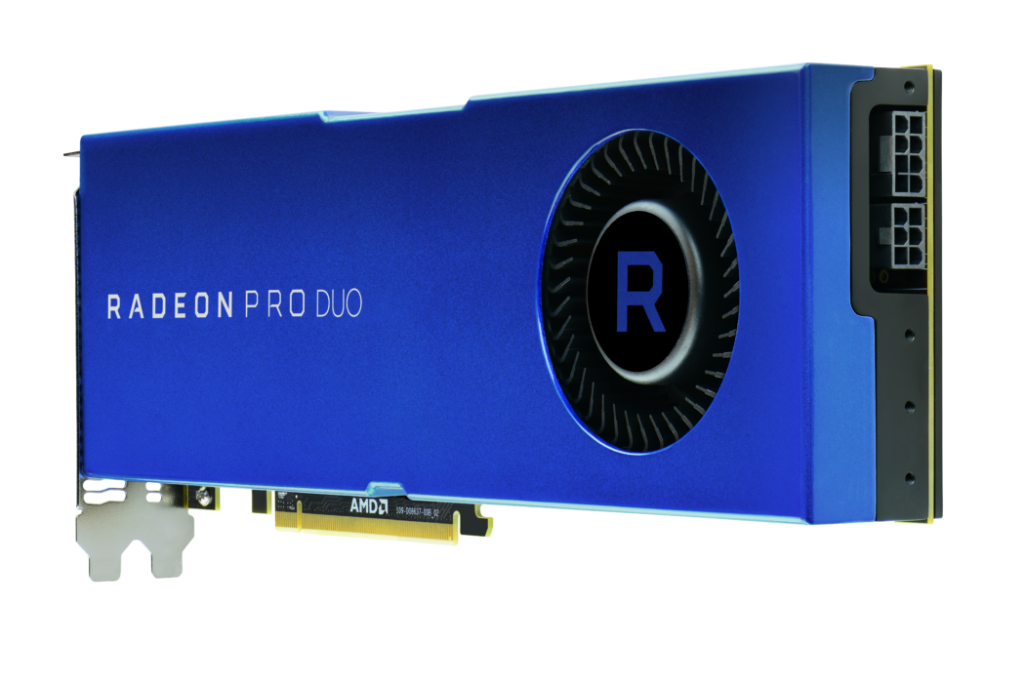 AMD suggests the card will be a major asset in producing VR content, in particular at 4K resolutions, and at content-creation multitasking. The card will be available in May, and AMD has given it a $999 price tag – considerably lower than its predecessor.

Now, if you’re thinking that Polaris is a different kettle of fish when compared to the dual Fiji XT cores in the original Radeon Pro Duo, then you are correct. The new Radeon Pro Duo promises to be a more suitable upgrade card for workstations that don’t require replacing entire power systems or changing enclosures to accommodate the added heat. It is also considerably under-powered when compared to the original – it loses 30% compute performance when compared to its predecessor. It also costs 33% less, which should make it reasonably more competitive, if you’re happy with the performance. The biggest advantage we’ve detected so far is the card’s 16GB (x2) GDDR5, which will allow content creators to work with much bigger data sets/video buffers than the original. This might work out well for very hi-res content, but only time/benchmarking will tell.

Here’s a non-comprehensive feature comparison of the new card and its predecessor (we’ve put in bold what we think are each card’s assets).

The original Radeon Pro Duo was a monster of a card, with integrated watercooling and rated at a torrid 350W – to such an extent it required 3x 8-pin PEG connectors. It had a 4GB HBM framebuffer on each chip, derived from its dual Fiji XT design (the same as Radeon R9 Fury X). It also cost a cool $1500 at launch. The card was, for lack of a better word, powerful. The new card, however, will have to prove its mettle and rely on the GDDR5 to deliver what the original could not.

KitGuru Says: We can’t help but think this is an odd move from AMD, and the message is far from easy to get across to AMD’s professional audience this time. Maybe some craft technical marketing and benchmarks will prove the computer performance is made up by the framebuffer size… or not.