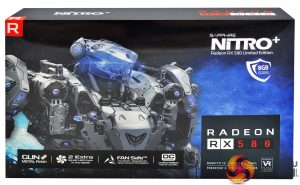 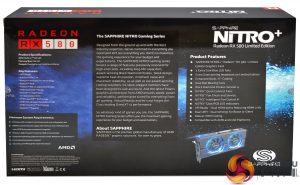 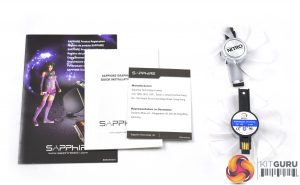 The accessory bundle includes some basic documentation and two spare fans. These are both transparent and include blue LEDs and give the end user the choice of the more subtle default fans or some extra flare with the blue LED fans. 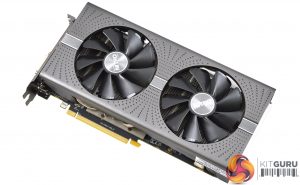 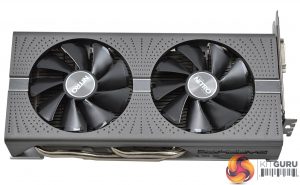 The Sapphire card uses a pair of fans, 100mm – and a plastic shroud to enclose these. The design is subtle with a grey and black aesthetic to blend in with the majority of system builds, Sapphire’s RX 480 version of this card is all black so the grey represents a slight change. 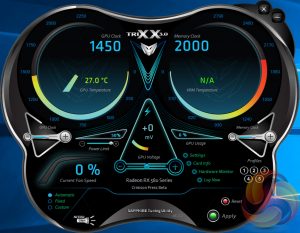 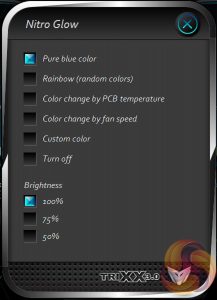 Sapphire implements its Glow RGB LED indicator, a software controllable RGB light underneath the Sapphire logo, as well as optional blue LED fans that should really be RGB capable.

The range of colour customisation and extent of the RGBs is not as advanced as on other brands but Sapphire still offers some customisation. All customisation can be done in the Sapphire TriXX software under the Nitro Glow option. 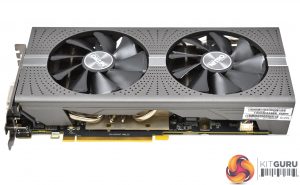 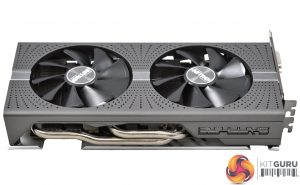 Along the top of the card the Sapphire logo is embossed into the plastic shroud. On the RX 480 Nitro+ a bulky switch is present in the cut-out near the heat pipes to house an LED switch but on the RX 580 version this isn’t present since the lighting is now software controlled. The gap looks a bit strange and Sapphire should probably have changed the PCB and backplate to account for this.

In the top section the two 8mm heat pipes are visible, the other two heat pipes, which are 6mm, are visible from the bottom near the PCIe lane and these comprise a total of four nickel-plated copper heat pipes. 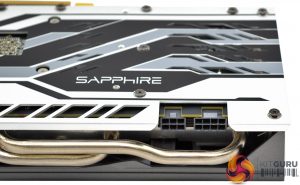 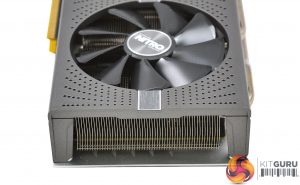 The Sapphire RX 580 Nitro+ LE uses 6-pin and 8-pin power inputs. AMD rates the TDP of the RX 580 at 185W but Sapphire’s will go beyond that given it’s high factory overclock. 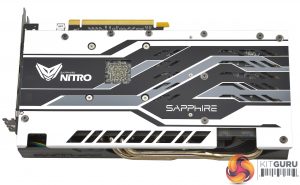 Sapphire’s backplate is stylish and helps the product to stand out as a quality piece. It uses a tri-colour design – black, grey and white, with some cut-outs for ventilation. Many vendors of RX 500 series cards do not use backplates so we’re pleased to see Sapphire making the effort.

The PCB layout of this card is identical to its predecessor, the Sapphire RX 480 Nitro+ OC. You can read a disassembly and closer inspection of that card here. 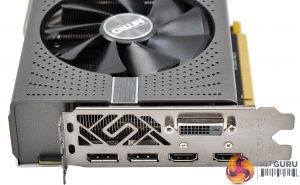