Corsair Obsidian 1000D started life as Project Slate at Computex 2017 with the key features of support for dual systems and a colossal amount of cooling hardware. The Corsair suite at the Hyatt had Slate positioned in a dark corner to make absolutely certain we got the full impact of the extensive RGB lighting.

Corsair highlights the fact that the Obsidian 1000D support 21 fans out of the box with 16 at the front (that’s two 480mm radiators with fans arranged in push/pull), three fans in the roof and two at the rear. Corsair had populated the entire collection and the result was impressive, so it took us a while to appreciate the 1000D is supplied without any fans at all. When you consider that a triple pack of Corsair LL120 fans costs £90, well, you can do the maths.

The other talking point about the Corsair Obsidian 1000D is the support for dual systems with E-ATX in the main chamber and a Mini-ITX system towards the bottom of the case. If you take this approach you’ll require two of everything, including motherboards, CPUs, graphics, power supplies, RAM and cooling systems. Naturally we couldn’t resist going for the maximum so we arranged a massive pile of components and got stuck in.

Note: if the above gallery is not displaying properly, you may need to disable your ad block software as they are known to interfere with our display code.

The Corsair Obsidian 1000D is an example of excess where every aspect is pushed to the limits. When we posted the first video just before Computex 2018 we did the bare minimum of editing and delivered a video that was nearly four hours in length. We wanted you to see the decision making process so you could appreciate the back and forth in our thinking as well as the up and down and, on occasion, the round and round.

The second video is one hour 50 minutes in length so in total you have about six hours of video, which should make it perfectly clear that certain aspects of the PC builds were an uphill struggle. The fundamental problem is the significant size of the 1000D, which in particular is very tall. To fill the space you want to use radiators at the front of the case and also at the top, ideally with fans in push/pull to increase the thickness of the cooling package. That works aesthetically however the approach creates a number of problems.

Most of us would rather locate a thick 480mm radiator on the floor of the case, however that is not possible with the 1000D in stock form. No doubt you could mod the case and rip out the drive housing that gets in the way on oh-so-many-occasions but as things stand the floor of the case is reserved for the power supplies and HDD storage.

If you are using a double chamber case the rear compartment might provide a good location for a radiator, however the 1000D simply doesn’t have the space in that dimension. Added to that you will have a great deal of cabling to hide away and it is bound to end up behind the right hand cover and those folding French doors.

To our mind the last place you want a large radiator is in the roof where it will potentially get in the way and any leak could have catastrophic consequences, however it makes sense from an aesthetic perspective. We started our build with a radiator up top and swiftly removed it because it seemed like a bad idea, instead choosing to install two 480mm radiators at the front.

It is a similar story with the pumps and reservoirs. Corsair has provided a mounting plate on top of the drive housing but it didn’t seem ideal so we instead mounted the units on fan brackets at the front of the case.

We decided to max out the storage in the 1000D, however that wasn’t as easy as it sounds. We were using the 1000D to build two systems, rather than modding or adapting the parts, so we wanted to make full use of the drive housing located in the middle of the case. WD sent us five 6TB Blue HDDs, along with a collection of Black, Blue and Green SSDs. The result is impressive in the sense that we had a colossal 33TB of storage and a great many devices connected to our motherboards. Balanced against that we had to use all the SATA data connections on the two motherboards (six on the ATX and four on the ITX), however we ran out of SATA power connections on the SFX and had to employ the ATX as that had loads of connections. As we discuss in the video we could have used Molex-to-SATA adapters but that would have added yet more cabling.

You will have seen in our videos that we faced decisions like these at various times during the build, and no doubt you have your own views how well we dealt with the various problems along the way. Whatever your views might be, if you leave a comment below you should feel free to add a link to your own custom PC build.

This feature is based on a review of the Corsair Obsidian 1000D, which means we took the case on its own terms. It is big, heavy, expensive, supports dual systems and only makes sense if you employ extensive liquid cooling. The fact that Corsair sells a huge number of RGB products and was happy to provide a great many LL120 fans and Commander Pro units inevitably meant we went down the ‘bling' route, instead of constructing a serious workstation.

Take those points together and you will see we are not arguing whether dual systems make sense or how much liquid cooling is required for a high end PC. Instead we went down that route because we effectively had little choice in the matter.

When you look at other reviews of the Obsidian 1000D you will doubtless find instances where the builder used a tower air cooler or an All In One and while the finished PC may work perfectly well, here at KitGuru we feel it makes very little sense to use 1000D in that manner. 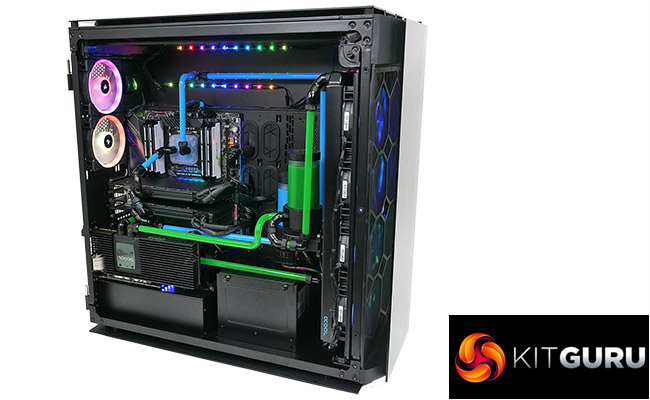 There is no doubt the 1000D is very large but that is not necessarily the same as saying that it is well designed for a Mega Build. We like the two sliding racks for the radiators as they can removed to make life easy when you install the radiators and fans. We are pleased to see that Corsair offers these racks in various configurations so you can customise the build pretty much any way you like. On the other hand cable management is hard going and it is quite a struggle to feed all the cables for the fans and RGB lighting to the correct place.

It is a similar story with the main compartment. Installing the ATX motherboard is easy, installing the ITX board is less easy and once all the graphics and cooling hardware are in place you are unlikely to be able to reach many of the components. We found that even the simplest task such as moving a fan connection on a motherboard required the skills of a surgeon.

This build took a long time and we are satisfied the results are functional, unique and interesting. We are also confident the same will be true for anyone else using a Corsair Obsidian 1000D as there is no chance of two builds coming out the same way twice as the permutations are simply too high for that to happen.

KitGuru says: KitGuru used the Corsair Obsidian 1000D to build an extreme PC that costs a fortune and delivers a suitably epic frame rate in any game you choose.