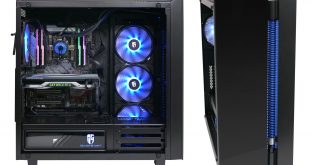 The New Ark 90 case from GamerStorm is big, imposing and impressive, with a model name that is ever so slightly confusing. Here in the UK the word Ark is a biblical reference to a wooden boat that carries animals away from a flood. Whatever you might think about this PC case, we can certainly agree there is nothing woody or organic about it.

Indeed the lines are very clean and crisp and we can see why GamerStorm describes the New Ark 90 as ‘Black Obsidian’. The case looks incredibly dark and understated when it comes out of the packaging, but of course at this stage you haven’t connected the power or unleashed the RGB lighting that is such a key feature of this case.

With the main glass panel removed you get a good look at the integrated 280mm Captain liquid cooler that adds a good deal of value to the New Ark 90. This cooler is more involved than a regular All In One as it includes a tubular reservoir that is on show at the front of the case. Another part of the aesthetic of the cooler is the way the radiator is mounted on the mid-plate of the case with the fans turned sideways so they are fully displayed in the window. Pretty much every case on the market with RGB fans has them installed at the front so this layout sets the GamerStorm New Ark 90 apart from the mainstream.

Note: if the images on this page are not displaying properly, you may need to disable your Ad Blocker as they are known to interfere with our display code

Building a PC inside the New Ark 90 is very quick and easy. There is plenty of space to work with and the integrated cooling system means you just attach the water block to your CPU using the appropriate supplied fitting kit and the job is pretty much complete.

The RGB lighting is part of the case and has no connection to your motherboard, which means you can simply ignore it while you are building your PC. You will have to navigate a certain amount of cable mess behind the motherboard tray as each component of the lighting system has a separate cable that is daisy chained together but in terms of work there is very little for you to do.

We might have gone for a vertical graphics card arrangement however we didn’t have the cable and as a result we simply installed our RTX 2080 in the usual way.

When you turn the system on the case is transformed from an inert black slab into a tower of RGB. The lighting system includes all four fans, power supply shroud, the CPU block, the reservoir at the front and a lighting strip along the top of the case. As we demonstrate in our video the visual impact is impressive, however it is clear that only the hubs of the four fans are illuminated and that detracts from the light show. We have seen some truly impressive ARGB systems in recent times and the RGB supplied by GamerStorm is pretty much as basic as you get.

In addition, you cannot integrate the lighting in the case with lighting in your motherboard. Enthusiasts will regard this as a weakness as the lighting effects you can toggle through using the buttons on the case are quite limited. On the other hand newbies may appreciate the fact that they don’t have to worry about the complication of extra software.

Having said that, we dearly wish that GamerStorm had chosen a more sophisticated lighting system with ARGB that would add both value and quality to this case. 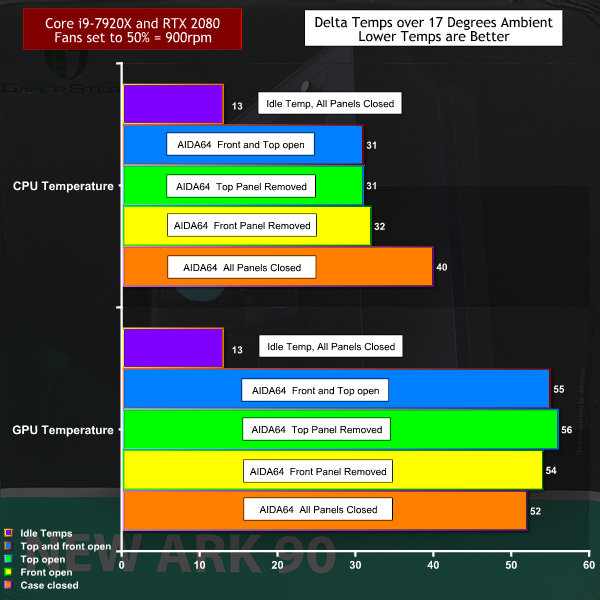 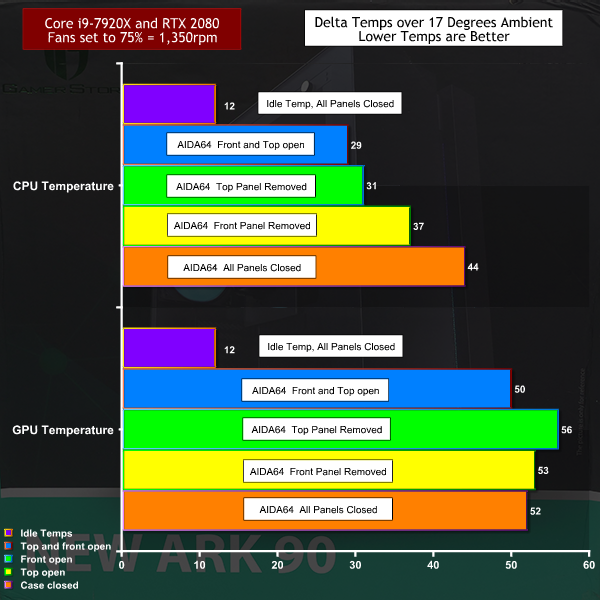 Cooling Performance Overview
We fully expected to find problems with the air flow in the GamerStorm New Ark 90 as the intakes on the front and top of the case appeared to be quite restricted. If this was correct it follows that the case and Captain cooler would struggle to maintain low temperatures on the Core i9-7920X CPU.

We carried out more temperature checks with the front and top panels removed and found the temperatures were slightly lower with the increased fan speeds, which suggests the intakes are indeed restrictive. Having said that the case cools well and out recommendation is that you operate the fans at a relatively low speed as that works best.

Acoustics performance.
With the fans running at 900rpm we found the GamerStorm New Ark 90 was reasonably quiet however when we increased speeds to 1,350rpm it was uncomfortably noisy. There is no intake filtration or other material to reduce fan noise so your best bet is to run the fans as slowly as you feasibly can.

The GamerStorm New Ark 90 is an impressive black glass case that looks good and comes complete with glass on the top, front and side panels. It has an integrated 280mm liquid cooler and a large amount of RGB lighting, and when you take those features together you have plenty that might appeal to a novice PC builder who wants a long list of features and isn’t much fussed about the price they will pay.

That’s just as well as the New Ark 90 is undeniably expensive. Naturally you have to make allowances for those various components and features, including a large amount of RGB lighting, and in particular the Captain 280mm liquid cooler brings a decent amount of value to the table.

Balanced against that we feel that enthusiasts will be disappointed by the closed nature of the RGB system as you cannot connect the New Ark 90 to your motherboard and as a result you cannot use software such as Aura to experience sophisticated lighting patterns. 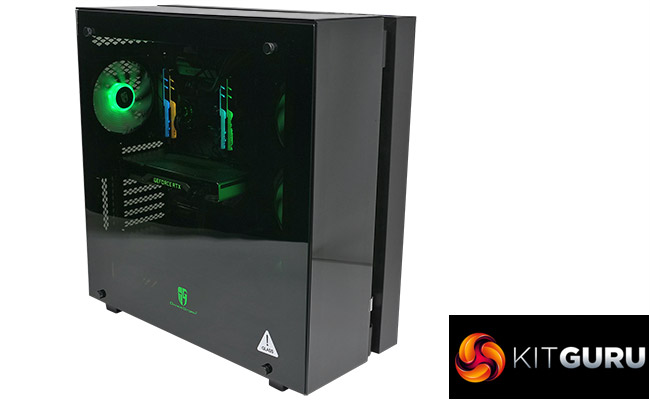 We have a handful of complaints about the case such as the absence of dust filters on the intakes and the rather olde worlde I/O panel which ignores USB 3.1 and Type C.

The case works well as an enclosure, and that is despite the fact we first assumed the emphasis was on aesthetics, which might mean it didn’t flow air particularly well. The fact that increased fan speeds hurt air flow, instead of improving it, suggests the intakes may indeed be restricted however the temperatures of our mighty Core i9 and RTX 2080 were very acceptable and clearly did not suffer any problems.

You have two fundamental questions to address before you buy the New Ark 90. The first is whether you require such a large E-ATX case, which is clearly a question of logistics and space. The second is whether or not you might want to water cool your graphics card. There is plenty of room for a second cooling loop but it also adds complication to a case that is clearly aimed at making life easy for the novice PC builder.

This is a visually impressive case that is very imposing but it certainly isn’t aimed at the mainstream user.

KitGuru says: New Ark 90 is big, bold and packed with RGB but comes at a high price.