The new extreme low latency memory will feature high-performance Samsung B-die ICs, to achieve the worlds lowest latency of CL15 at DDR4-4000 and will be available in both Trident Z and Trident Z Royal 32GB (8GBx4) kits.

G.SKILL is well known for pushing the limits of DDR4 performance and breaking records along the way. This time around, latency is the key focus for G.SKILL in the search for the ultimate memory kit, tuned not only for speed but also for efficiency.

Previously, the lowest CAS latency that could be achieved in DDR4-4000 memory kits was CL17. G.SKILL has again pushed the boundaries and can now offer specifications of DDR4-4000 CL15-16-16-36 modules in 32GB (8GBx4) kits running under 1.5V. The speed and latency of the new memory kits have been validated on the MSI MEG Z390 motherboard and Intel Core i7-9700K processor. 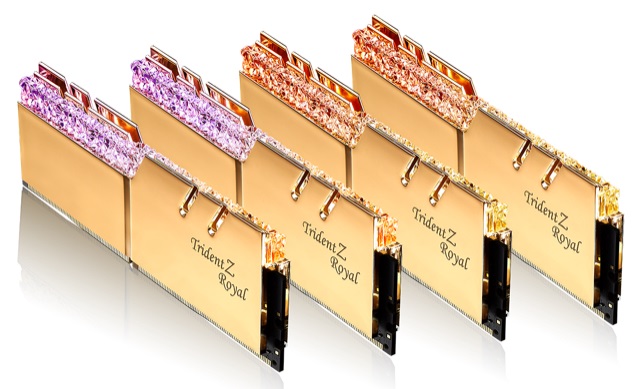 The extreme low-latency memory is available in Trident Z and RGB-loaded Trident Z Royal kits, both supporting the Intel XMP 2.0 specification for easy overclocking and will be available worldwide later in 2019.

KitGuru says: 4000MHz and CL15, yes please G.SKILL. I can't wait for these to be released and I'm sure many of you guys will be looking forward to this ultra-low latency, high-speed DDR4 memory too. All we need to know now is the price…