G.Skill Ripjaws memory is supplied with very distinctive heatspreaders. They are black with blood red stickers, the G-Skill logo is on the left and the name of the product on the right.

The heatspreaders are a medium height profile which will work well in a variety of systems, These will still not fit underneath the epic Noctua NH D14 unfortunately, but they should offer a little more compatibility with some of the larger CPU coolers on the market. The heatspreaders are aluminum and offer a high level of heat transference capabilities.

While memory is never the sexiest looking of computer components, these look great in a lighted system build.

CPUz reports the memory SPD configurations, right up to 1600mhz at 7-8-8-24 latencies with a 2T command rate. We got them running at 1T without any issues.

The heatspreader is comprised of two ‘parts’ which are adhered to the PCB underneath with thermal material. They are easily seperated with a little pressure without causing any damage to the modules.

The design is totally symmetrical and the two outermost teeth are joined so the spreader can be opened as a single piece. The memory is Hynix H5TQ2G83BFR – DDR3 SDRAM and the first 44nm DDR3 released by Hynix, it features a decreased chip size a via copper implemented triple-metal layer and WN barrier-metal techniques. There are eight 256MB chips on each side for a total of 4GB on each DIMM. They operate at a reference voltage of 1.6. 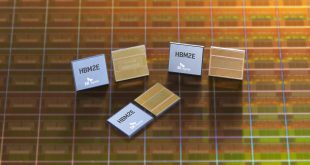 It was less than a year ago that SK Hynix started to mass-produced HBM2E, but the memory manufacturer is already working on the next generation of HBM memory. Named HBM3, the next-gen memory promises to deliver speeds of up to 5.2Gbps per chip, which translates into a bandwidth of over 665GB/s.