Biostar is starting to fill out its line-up of motherboards for this year with the launch of two new Racing series B250 boards, featuring Intel’s new B250 chipset with compatibility for the latest generation Kaby Lake chips. We have already seen some of Biostar’s Z270 boards, but with the launch of B250 there are now some budget options on the market, starting as low as $79.

Today Biostar is launching the BIOSTAR RACING B250GT5 and B250GT3 motherboards, featuring native support for DDR4 memory with speeds up to 2400MHz, along with Intel’s Optane Memory technology for high-speed storage solutions. Along with that, both of these motherboards support Intel’s LAN Ethernet solution, paired with Biostar’s LAN surge protection technology. 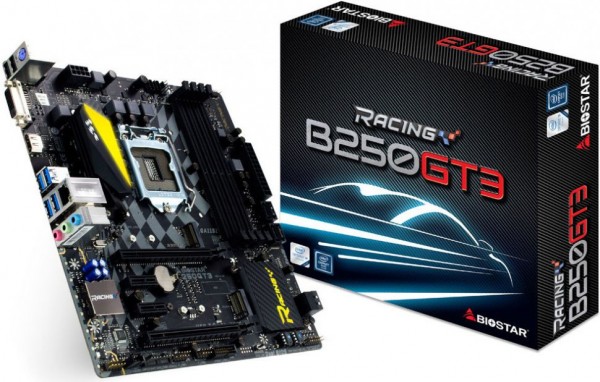 Both of these budget boards support M.2 drives and support dual-BIOS, allowing you to effectively recover from any botched BIOS updates or corruption swiftly. Both of these boards also feature Biostar’s Vivid LED DJ technology, allowing you to customize some of the lighting on the motherboard to add some extra flair to your rig.

KitGuru Says: Biostar are making quite the splash this generation. Are any of you currently looking to build a new system for 2017? What do you think of these new motherboards from Biostar?