Home / Channel / Computex / Computex: Corsair 1200i could be most advanced PSU ever

Computex: Corsair 1200i could be most advanced PSU ever

George is Corsair's guru of all things electrical. He's also a huge enthusiast. Basically, he loves this stuff. George loves the power. Not only that, he's also ‘bristling' to he point where he seems to induce enthusiasm in those around him. And George loves a bit of AX1200i action.

“100% digital is the only way to go”, says George and his logic seems sound enough.

“Remember all those Hi-Fi units with Christmas tree lights on the front?”, asks George. “They may look pretty, but in an analogue situation, every time you need to use the baseline signal o drive a light or other feature – you risk changing or otherwise degrading the source. And that's not good”.

“The best Hi-Fi units in the world tend to offer you ‘On', ‘Off' and ‘Volume', which raised a challenge for Corsair”, he explained.

“How can we achieve an 80+ Platinum rating for a huge PSU, while still being able to scan it, probe it and hook it into Corsair Link etc. That's why we decided to go 100% digital”, declared George.

“Our digital PSUs will be denoted by the addition of an ‘I' after the name”, he said – which makes them easier to spot. “And, at that point, you will know that you're looking at the best PSUs we have ever made”. We asked, but George was not keen to be drawn on who his manufacturing partner is for these supplies. Corsair made its PSU name with Seasonic – but we suspect a different hand at work here.

George also refused to confirm that the AX1200i was the first in a series that would be launched during Q3 and Q4 – but George is not a poker player and we saw a distinct nostril flare/pupil dilation when we asked this.

KitGuru says: While price drops are good, it's nicer to see innovation. George was keen to say that if all Corsair did was sit in a room, write down all the cool things it's competitors did and the ring the best bits together in a new product – they would never invent anything new. The world's first digital PSU with 80+ Platinum rating is certainly new – so more power to George & Co. 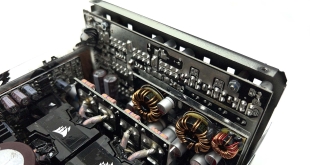 Today we look at the latest flagship power supply from Corsair, priced at over £330