Around the time of the first Pentiums, power supplies tended to deliver the kind of wattage a modern, high-end gaming notebook would eat for breakfast. It was a time when systems were prone to crashes/freezes – mostly blamed on Windows (because it was so ropey). Around the time that the AMD K6 began to take over the enthusiast market, Enermax launched its first ATX PSUs at 250w and 300w. Things have come a long way since then, for systems, Windows and power supplies. KitGuru scans the Enermax stand for signs of evolution.

As systems have become more powerful over the past 15 years, so power supplies have increased in capability and efficiency. Every enthusiast calculates carefully the amount of wattage their new rig will require, especially if they're planning on running with high-end, overclocked CPUs and two or more graphics cards. So, for a company like Enermax, what's the best way to show that your new high-efficiency PSU range has enough juice for any application?

So what else did Enermax have on its stand? Well, they are branching out into high-performance CPU coolers for one thing.

In terms of power supples, Enermax has moved on from its first 250w unit. This happy chappy is Florian and he's well chuffed with his up-coming 80 Plus Platinum model.

.
Just to test the depth of the stand-staff's conviction, we asked these ladies if they were able to explain what 80 Plus platinum actually means.

.
KitGuru says: The Revolution 85+ was a bit of a classic, Enermax will be looking to repeat that success with its new Platinum range and coolers. Competitive market. We wish them luck. 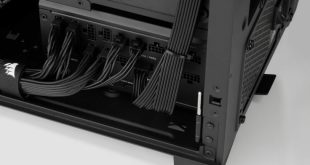 Following on from a leak a few weeks ago, today Corsair is launching its new …