To test the GSX 1000, I connected it up to a set of Harman Kardon GLA-55 2.0 speakers and a Sennheiser GSP 300 headset. I used it as my main soundcard for an extended testing period – one week – and also made comparisons between it and the Crystal Sound 2 onboard chip on the test system’s ASUS Z97-K motherboard.

I looked at the sound quality for games, movies and music, as well as its ability to deliver 7.1 virtual surround sound.

Whether listening to music or playing games or movies I found the audio quality to be consistently high throughout the frequency range and the sound borders on the warm side of neutral, making it a very pleasant experience. Not as detailed as some of the soundcards out there, but that is where personal preference comes into play.

In my case I found the audio of a noticeably higher quality when played through the GSX 1000 than from onboard motherboard audio. 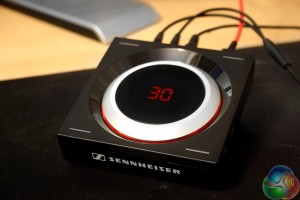 If the on board sound card is a cheap and cheerful one, you are likely to see an even bigger boost in clarity, especially if other parts of the chain – the audio source and speaker/headset – are of a comparable or better quality to this external sound card.

One big advantage that the Sennheiser GSX 1000 has over an on board sound card, is amplification. You are going to get a lot more volume out of the GSX 1000 than you would from a motherboard.

There are more powerful amplifiers out there, but the GSX 1000 seemed able to drive anything I threw at it. This is a gaming DSP first and an amplifier second.

While sound quality is something that will always have some measure of objectivity to it – everyone has a type-preference when it comes to audio of any kind – it is hard to deny that the Sennheiser GSX 1000 is an excellent virtual surround sound solution. 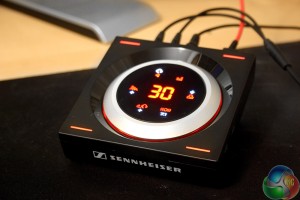 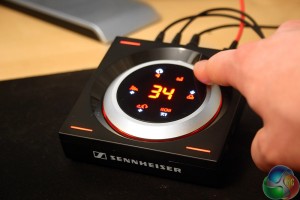 There were moments when using the headset for testing and I had the volume low that I thought the my speakers were playing instead of the headset as it sounded much more atmospheric than I was used to.

That effect was amplified in games. It not only gives you a sense of something happening behind you as well as in front or side to side, but that the world of sound is all around you, rather than simply where you are facing. It makes the game world feel alive in a way that is not possible with standard 2.0 sound.

While I would still advocate for a true 5.1 surround sound system for the best sense of things, the Sennheiser GSX does an amazing job at emulating that effect. Better yet, it does it without sacrificing quality of the drivers in the headphones. So often ‘real’ surround sound headsets that use multiple drivers in each earphone, sacrifice on their quality to keep the cost down.

Looking at the main lit up face of the GSX 1000, there are a number of touch-screen options you can make use of. Moving clockwise, the top left indicator switches between headphone and speaker outputs; the next option adjusts EQ settings for games, music and movies (or neutral); the next lets you amplify the front or rear of the surround sound mix; the one after that controls whether you have virtual surround sound on or not; then there is the sidetone amplification, should you wish to hear yourself while speaking, and finally we have the manual reverb control.

Each of these is easily adjustable thanks to the touch screen panel and although not the easiest to understand from their LED indicators, Sennheiser’s downloadable guide explains everything neatly and succinctly for you.

The ability to switch between speaker and headphone outputs at the touch of a screen was simple and for those who find themselves switching between the two regularly, a much easier way than going into your windows options to choose the output. Better yet, because it is a hardware solution, it does not matter if you booted up a game with the wrong one selected, you do not need to load it up again to use the correct output.

EQ wise, I thought that the music and movie settings added a new punch to the lower and mid-frequencies, which for those that want it is a nice addition. Audiophiles may miss the ability to fine tune their own equaliser settings though.

I did not think the gaming EQ setting was very useful however. It seems to remove almost all bass from the soundscape entirely, which unless you are playing very specific games seems a little redundant. It has a very significant negative effect on atmosphere so is not a setting I would recommend.

If you do not care for EQ settings though, you can ditch them altogether and enable Sennheiser’s 2.0 HD mode. While this does make it impossible to switch to 7.1 virtual surround too, it adds a little more clarity to the sound.

Amplifying various parts of the mix and the reverb when using virtual surround sound was useful however, depending on your personal preferences and I liked being able to control how much of my own voice I could hear.

It is nice that Sennheiser lets you manually control the reverb function too, as not everyone is a fan of it.