Typically when we think of high-end PCIe storage solutions, these are designed for Intel's HEDT platform – users with X299 motherboards and up to 18-core CPUs. However, at its press event in Amsterdam, MSI showed off its Gaming Storage card, bringing ultra-fast PCIe RAID 0 performance to its mainstream desktops.

At first glance, the Gaming Storage add-in card may look like a typical blower-style GPU – it has a black shroud, PCIe x16 connector and is roughly the size of a graphics card. However, there is more to this card than what meets the eye. 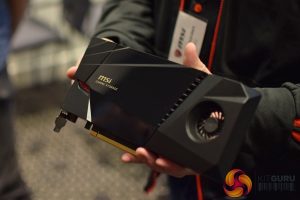 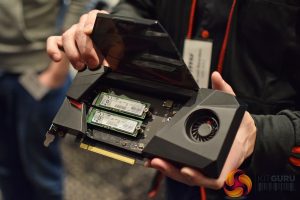 Essentially, the Gaming Storage card is a way for consumers on the Z370 platform to combine two M.2 PCIe SSDs in RAID 0 for ultra-fast performance. It does this by interfacing directly with a CPU's PCIe lanes – instead of using the PCH – for uncompromised performance.

And uncompromised performance is certainly what you get. We saw a live demo of the Gaming Storage card – equipped with two Samsung SM961 SSDs – hitting over 6600MB/s sequential read speeds and almost 3000MB/s sequential write speeds. A single drive, by comparison, only offers around 3000MB/s reads and 1100MB/s writes.

According to MSI's testing, this has a real-world benefit for loading large 4K videos and also for loading files into Photoshop. MSI tested the total time taken to load a 48GB 4K video file, and with a single M.2 PCIe SSD it took 5:40, while that was cut to just 1:59 with the Gaming Storage drive. Similarly, loading a 39GB file into Photoshop took the Gaming Storage card just 4:06, while a single SSD took 7:21.

Nonetheless, I think it looks like a very interesting product, the likes of which we have not really seen before. For content creators on the Z370 platform in particular, the additional speed could prove a real benefit, so perhaps we will see MSI releasing a standalone model in the future.