Samsung has announced the release of a new pocket-sized portable SSD series with lightning-fast speed and built-in security via a conveniently placed fingerprint sensor. All this comes wrapped in an elegant and sleek looking durable package.

The new T7 Touch portable SSD series from Samsung combines the fastest transfer speed available via the USB 3.2 Gen 2 standard, with a compact and sleek design and elevated hardware security in the form of a built-in fingerprint sensor. All these features make the T7 Touch one of the fastest and most secure portable storage solutions available today.

Samsung claims that the T7 Touch is designed for both professional and casual users and provides enough storage capacity to hold a large number of images, games of 4K/8K movies. T7 Touch can be easily connected to a range of devices such as PCs, tablets, smartphones, games consoles and is durable enough to be taken anywhere. 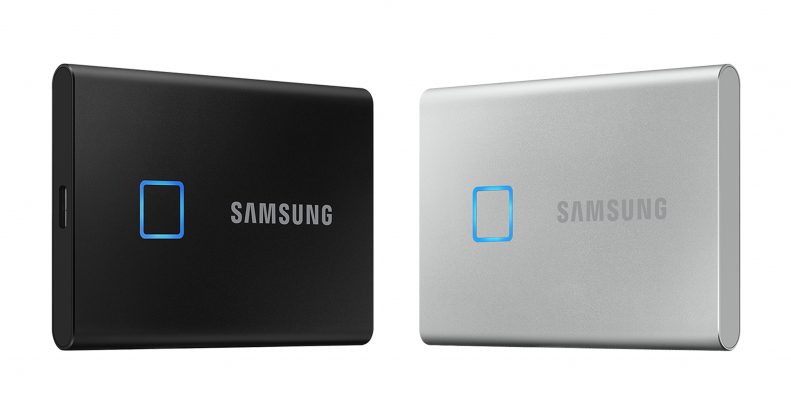 Transfer speeds of up to 1050 MB/s read and up to 1000MB/s write, provide a healthy upgrade over previous models, the T7 Touch is approximately twice as fast as the previous T5 and up to 9.5 times faster than traditional portable HDDs. For an added layer of security, the T7 Touch uses the first built-in fingerprint scanner on a Samsung SSD, as well as password protection and AES 256-bit hardware encryption.

The Samsung T7 Touch portable SSD is available in either a black or silver finish and is offered in various storage capacities including 500 GB, 1 TB or 2 TB, making it suitable for almost any scenario. To ensure connectivity with virtually any device, the T7 Touch comes with both a USB Type-C to Type-C and a USB Type-C to Type-A cables. The device is compatible with Windows, Mac and Android operating systems and includes a three-year warranty for user peace of mind.