Toshiba has unveiled its 1TB SSD this week, built using 15nm cell lithography as well as TLC flash. The SG5 SSD comes in the form of a 2.5-inch drive as well as an M.2 drive, this is part of Toshiba's switch over from 19nm SSD devices to denser 15nm NAND variants, which will be phasing in over the next six to twelve months.

As Channel Register points out, these new SG5 M.2 and 2.5-inch drives are intended for consumer desktops and notebooks and will come in 128GB, 512GB and 1TB flavours using a 6Gbit/s SATA interface, with read speeds of up to 545 MB/s and write speeds of up to 388 MB/s. 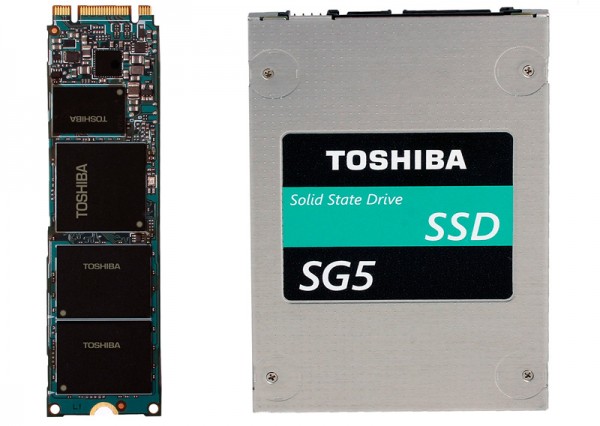 Right now, IOPS numbers have not been released and we don't know how many hours the drive is rated to last for. However, we do know that the drive makes use of Swing-By Code error-correction technology, which is new so details on exactly what it does for drive performance aren't present just yet.

KitGuru Says: Toshiba is currently working on switching from 19nm to 15nm in its SSDs and this appears to be the first step. Do any of you own a Toshiba drive?