The innovative lads over at Prolimatech have been tinkering with a couple of new CPU air cooling designs for the LGA2011 platform in recent months of which some images of them in current form have appeared online. One of them appears to be a prototype shown in the flesh, while the other is presented in CGI form for now.

What we can say straight off the bat is that it’s nice to see Prolimatech stepping away from the mass of typical tower-style CPU coolers flooding the market and trying different ways of ridding your precious Sandy Bridge-E chip of as much heat as possible.

The first cooler we can see in the photo above looks to be a more low-profile, leaner version of the company’s own Genesis cooler. This one is flat the whole way across while retaining a dual-independent fin-stack arrangement and employing the assistance of six nickel-plated copper heatpipes which pass through the cooler’s base.

With the obvious size differentiation between the two fin stacks, you can see this is done purposely to allow the larger to hover over the more open memory area east of the motherboard socket, where the smaller one would sit atop the slightly more cramped memory area to the west. But if it’s possible to get a decent sized dual-fan setup mounted above, we’d imagine this will be of direct benefit to that all important power circuitry area of the motherboard as well.

This next cooler is certainly quite unlike anything we’ve seen before; a rather curious looking design comprising six heatpipes running through four sets of half height fins (to make room for the memory) with three sharp U-turns applied. The cooler’s base is situated in between the dual-fin stacks on either side with the orientation for the fans providing side-flow ventilation.

On the subject of fans, a multitude of options would be possible with this cooler. A single 120mm fan can be attached in the middle, while the cooler could further accomodate up to two more on either side of the fin stacks.

This is all we know about the above two LGA2011 coolers from Prolimatech thus far. We’ll try and get a hold of model numbers, pricing and launch dates asap.

KitGuru says: Not so sure that second cooler will be able to rise above in terms of cooling prowess, but it’s nice to see when companies step outside the box nonetheless. 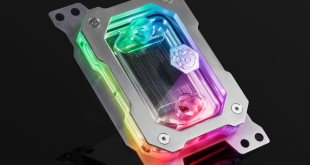