Nobody likes being injected, especially not children, but it turns out that distraction and setting can play a big part in how traumatic the experience is. Having kids put on a virtual reality headset and view relaxing scenes can help reduce the amount of pain felt while receiving the injections.

The study was conducted by Sansum Clinics in Santa Barbara and Lompoc, California, and gave just under half of 244 children vaccinated over a period of two months, access to a set of Turbot 3D VR goggles while receiving their seasonal flu injection. Asking the kids how much pain they felt at the injection, there was a notable trend, where those wearing the VR headset reported a 48 per cent drop in pain compared to those who didn’t.

When asking parents about their children’s reaction, 48 per cent noted less pain and 52 per cent less fear. That figure was even higher if you asked staff, who believed that children suffered 75 per cent less pain when wearing the headsets. 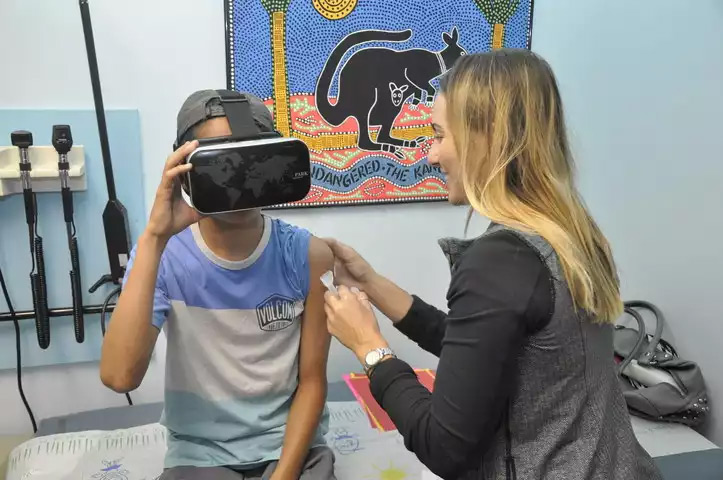 Imagine if we hooked this kid up with a Vive, then he’d really be impressed. Source: Sansum Clinic

While some of these numbers don’t represent the most accurate way of measuring pain, they do add up to suggest that there is a very real effect of giving children a relaxing view while something traumatic is happening. This could be important for parents who have children with a distinct fear of needles or doctors offices, as many families delay injections because of those fears.

It could also provide other potential avenues of medication free pain-relief, which could be vital for those with addictive personalities or unique allergic reactions.

The results of this pilot project will be shown at the World Summit of Pediatrics later this year, where we may see new studies pop up to further test this hypothesis.

KitGuru Says: It would be great if patients of all ages could receive some pain relief simply through using virtual reality. Those in pain or with limited mobility could end up benefiting the most from VR.