The ROG Strix GL12 aims to offer an unconventional design for gamers who like aggressive, angular ‘slashes’ across the front of their chassis as well as a transparent side panel and integrated Aura Sync lighting. All of the lighting is customisable – from a palette of over 16 million colours – and a load of cool presets are offered for those who rate convenience over customisation. The transparent side panel lets your game in wonder at the extensive RGB lighting – as well as the red-glowing ROG logo on the water block.  We wanted to know ‘How much and when'.

We recently spoke with YiTing Liu, ROG gaming marketing specialist. She was coy about the exact details, but we gathered that this is the first complete PC from ROG that has complete Aura Sync lighting integration and will be selling in the UK closer to the start of March. Early guesstimates on street pricing indicate something in the £899 (8500 and GTX1050) to £1849 (8700K and GTX1080) range – depending on the specification you choose. 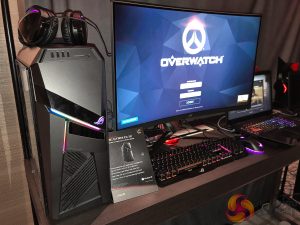 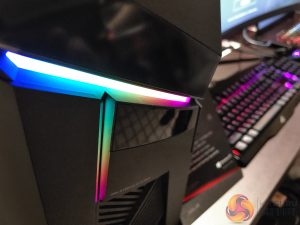 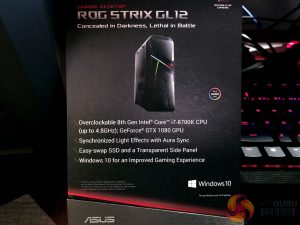 We saw it being demoed with Overwatch next to a gaming laptop and, in that environment, it was near silent.

While ASUS continues to develop and sell complete systems, we were told that they are committed to doing this very slowly – to avoid upsetting channel partners. The fact that ASUS banged in a record year for motherboard sales in 2017, leads us to believe that the ‘complete ROG systems' are having little effect on the company's components business.

Most of the models are likely to boot from an SSD, but for those that want to add in bigger ‘fast storage’, there is a front mounted SSD tray. 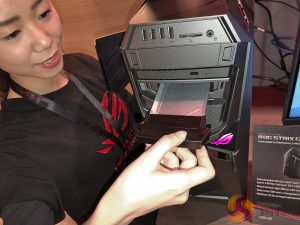 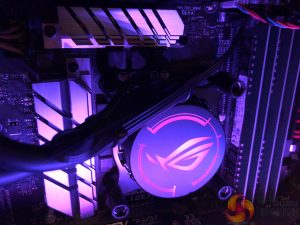 ROG are building stock right now and expect the UK to see the new Strix GL12 range in a couple of months.

KitGuru says: While hardcore KitGuru readers are likely to be building bespoke systems from scratch, there are a lot of people out there who want to play ‘AAA games with everything turned on', but who are not able/willing to build that system themselves. This is exactly the market that ROG is tackling. 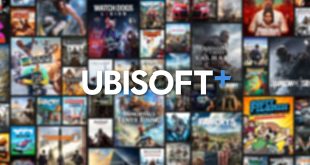 At some point last year, Ubisoft began working towards bringing its Ubisoft+ subscription service over …