We are examining the Lenovo ThinkStation P620 workstation that is built around Threadripper Pro and its 8-channel memory support. There are a few options for the base processor on Lenovo's website including 12, 16, 32, and 64 core options. Specifically, we are looking at the 32-core Threadripper Pro 3975WX chip and we are hoping that Lenovo can keep it running at the rated 3.5-4.2GHz speeds beneath that modestly sized CPU cooler.

Partnering this 280W TDP monster with its 128 PCIe Gen 4 lanes is 128GB of 8-channel DDR4 3200MHz ECC memory. While a 128GB installation is merely small-fry for Threadripper Pro, the 3200MHz modules running in 8-channel mode should allow for some excellent results in bandwidth-intensive tasks. Plus, you get a 1600MHz Infinity Fabric link for the Zen 2 cores.

I will, however, emphasise my dislike for Lenovo decision to deploy a 40mm fan and shroud to cool each DIMM bank. This seems unnecessary for a 128GB installation and merely adds additional noise and points of failure. Metal heatspreaders on the DIMMs would have been better, if enhanced cooling is deemed necessary.

Graphics comes in the form of an 8GB Radeon Pro W5700 blower-style card which we have already reviewed on KitGuru. That makes this an all-AMD system as far as the key components go. Another key benefit is ISV certification for the Lenovo P620. That point will be music to the ears of system buyers in a business environment with users who run software on the guaranteed support list.

Another point that will garner particular attention from prospective buyers is the display output connectivity. On its ‘pro-grade' card, AMD deploys five Mini-DisplayPort 1.4 connections and one USB-C port. That gives you convenient access to six total display outputs which is super. As highlighted in our review of the Radeon Pro W5700, you can power five 4K monitors or three 5K alternatives, making this an excellent workstation proposition.

Lenovo uses its own WRX80 motherboard to house the sWRX8 Threadripper Pro CPU. The power delivery solution looks competent and Lenovo's use of proper finned VRM heatsinks with passive cooling is to be commended. Six total PCIe Gen 4 slots are provided by the motherboard – four x16 bandwidth and two x8. However, only two x16 slots remain usable due to the slot spacing, and the top one will likely interfere with the RAM fan's header.

It is actually disappointing to see Lenovo offering up sub-par expansion slot capability. There is no clear way to use the 128 lane capability from Threadripper Pro. That is especially disappointing to users who will want multiple graphics card alongside high-bandwidth networking and storage devices. However, the limited expandability is a clear compromise from Lenovo's use of a compact chassis with just a couple of 80mm fans for intake and exhaust airflow.

At least you do get dual, cooled M.2 slots on the motherboard. One of those is occupied by a 256GB WD SN730 SSD in our install. Clearly, most users will want to adjust the storage configuration. But this is clearly a very subjective requirement, so I respect Lenovo for offering a basic, cheap drive for the baseline configuration.

Power is delivered by a 1kW 80Plus Platinum unit. Lenovo highlights 92% efficiency on the configurator page, but this is likely a mistake for 230/240V UK customers given the more stringent 80Plus Platinum requirements for those operating voltages. The PSU's tool-less design is absolutely superb and works very well; a single connector port feeds power from the unit through the motherboard where it is then distributed accordingly, including via break-out cables for PCIe and SATA connectors.

Connectivity for the system is just ‘OK‘. You get 10GbE Aquantia AQC107 networking onboard, but a secondary network adapter is disappointingly omitted. I would have liked to see a few more USB ports on the rear IO, including some in Type-C form and preferably 20Gbps high-speed rated. However, the front IO is excellent with four 10Gbps USB connections, two of which are Type-C. I also appreciated the system's included audio speaker when using the unit without a proper set of speakers.

The chassis build quality is good and feels very well-built given its compact form. Man-handling the hefty system is easy thanks to the front handle. And the internal tool-less design is excellent. Lenovo's configurator gives an option to upgrade to a side panel with key locking to prevent unauthorised access, which is good to see.

With that said, cooling certainly looks to be limited with just two 80mm intake fans on the chassis. The graphics card, CPU, PSU, and (annoyingly) RAM also have fans to take care of their own cooling. If you are thinking of adding a second high power GPU, though, the internals are likely to get very toasty. 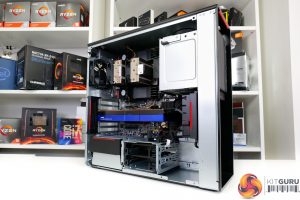 Priced at around £5.5-6K inc. VAT in the UK (depending on the graphics card situation given current shortages), we are keen to see how Threadripper Pro performs in this reasonably compact workstation.