Acer's newly announced all-in-one PC just so happens to double as a massive tablet. The 17.3 inch Acer Aspire Z3-700 comes with a touch screen, an Intel Skylake based CPU, 8GB of RAM, an SSD or traditional hard drive, along with a high-capacity battery so you can take it around the house. The battery itself lasts up to five hours, so you will need to revisit the plug socket every now and then.

The Aspire Z3-700 is set to start at around $700, featuring an Intel Celeron processor, which isn't the most powerful but this PC isn't really aimed at power users. 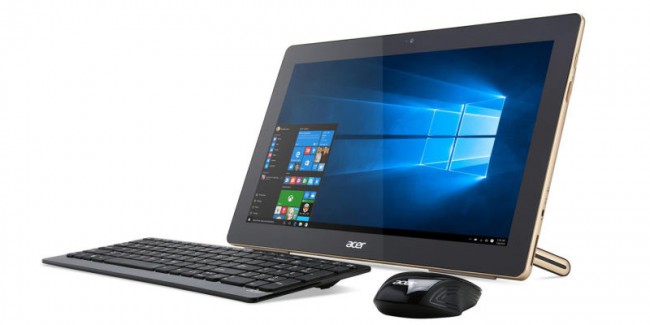 The all-in-one is set to go on sale later this year, pre-installed with Windows 10, which comes with user interfaces optimized both for the touch screen experience and the traditional desktop for an easier transition with hybrid style systems.

It's certainly a novel idea, and the Intel Celeron processor isn't much of a power hog, so it should be able to run quite well while even in its battery-powered state. However, I do wonder how many people would find an all-in-one/tablet hybrid like this useful.

KitGuru Says: We have seen plenty of all-in-one devices with touch screens equipped but they don't tend to come with a battery thrown in for portable power. What do you guys think of this idea? Personally I think I'd rather stick to a laptop/tablet hybrid system.